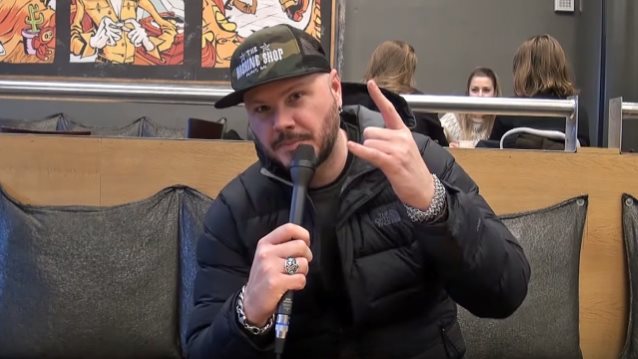 SOILWORK To Get Into 'Writing Mode' During The Summer

Finland's Kaaos TV conducted an interview with vocalist Björn "Speed" Strid of Swedish metallers SOILWORK before the band's February 11 concert in Tampere, Finland with KREATOR and SEPULTURA. You can now watch the chat below.

Speaking about SOILWORK's plans for the follow-up to the 2015 album "The Ride Majestic", Strid said: "I don't think we have any solid ideas yet. There's a few ideas where we wanna take things, but we don't really have any songs so far. I think we'll slowly get into writing mode maybe sometime during the summer. Maybe we'll enter the studio in the wintertime — in the beginning of next year, maybe."

The band's tenth studio album, "The Ride Majestic", was issued in August 2015 via Nuclear Blast.

Verbeuren was replaced in SOILWORK by Bastian Thusgaard of THE ARCANE ORDER.