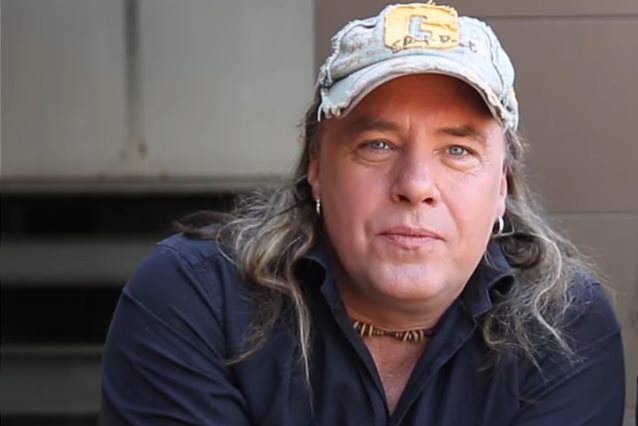 On how the HELLOWEEN reunion came about:

Andi: "The whole idea started when GAMMA RAY was supporting HELLOWEEN [in 2008]. It was not scheduled, it was more or less happening accidentally. We met in Hamburg and Kai [Hansen, guitar, also of GAMMA RAY] said, 'We just finished our album.' And Weiki [Michael Weikath, guitar] and I were saying, 'Yeah, we just finished our album. Why don't we tour together for the first time with you supporting HELLOWEEN? That would be great for the fans and they would freak out if you joined HELLOWEEN for the last one or two songs, playing up there like the old days.' That turned out to be such a great spectacle for the people; they really loved it. The next step was quite clear. That would be to ask Michael Kiske if he would like to join and do something like a real reunion, but don't destroy the working band, but bring the people a two-and-a-half- and three-hour show onstage where they have 30 years of metal with the original singer, with me for the next generation, and make a big happening out of it. It worked so nicely with Kai playing the guitar, then the next logical step would be to have the real band onstage as well."

On his relationship with Michael Kiske:

Andi: "I think he doesn't dislike me. [Laughs] I don't dislike him; I think he's a really cool guy. I think he's very laid-back, so he should be a person I can get along with very nicely. Mainly, we were actually thrilled about imagining the fans down there when they finally have the chance to see him sing the old tunes, and then even together with me on one or two tunes from my time. Put it this way, from an ego point of view, I'm so happy not to have to sing all of these high-pitched Michael Kiske songs anymore. I'm so relieved that he's back in the band and I can concentrate on my own shit. That should work really nicely."

On what Hansen's role will be for the live shows:

Andi: "If I go through the songs, I realize there are lots of songs on the studio recordings having more than three guitars, so that should be interesting. We are able to bring onstage even more original CD sounds than possible with two guitars. For all the rest of the songs where there are only two guitars, I think it's great for one of those guys to say 'Goodbye' and have a cigar. [Laughs] It's a five or six-minute break for maybe Sascha [Gerstner, guitar] or maybe Weiki or Kai, then they have a smoke and that's great. That's the way I look at it from my point of view. I'm finally having a break in the show, having some wine, or a good little cigarette, and watching the boys. This is something really interesting. I never had that before. Same goes for Michael [Kiske]. As far as I remember, when we talked about it, he always had a smile on his face and said, 'Yeah, that's cool. After 10 or 15 minutes, I have a break, and you go sing.' It's different, but it could be very interesting, not only for the fans, but also for the band itself. The only guys I'm a bit scared for is Dani [Löble, drums] and Markus [Grosskopf, bass] because they have to play two-and-a-half and three hours without a break. I hope that turns out not to be a problem, and both say 'No, it shouldn't be a problem. It depends on how you design the running order.' You shouldn't play 'Push' and 'Eagle Fly Free' without a song in between in mid-tempo because both of them will probably be dead after these songs. There will be a way. They say it's not a problem, so I believe they are professional enough. Nevertheless, I'm very much looking forward to that. This is unbelievable. Imagine 30 years of metal with one band who was always there and still is here. I personally think it's a great adventure, not only for the fans but myself and ourselves."

On whether the "Pumpkins United" tour will be hitting the U.S.:

Andi: "Yes, absolutely. What you see now with the stuff on Facebook or [by] following our web site, don't worry — these are just the first confirmed dates and there will be dates added nearly every day. When it comes to the United States, we will play at least all the big metropolitan cities, and we're doing Canada. It's just a question of timing, that's all."

On whether HELLOWEEN is writing new songs:

Andi: "Not on purpose. Not consciously. Actually, just sitting on the sofa, collecting ideas, talking for myself, means talking for everybody. I know the guys are the same. At the end of the day, when you are sitting in front of your television and you take 30 minutes, you suddenly have your guitar in your hands again. That's pretty normal. When you have your guitar, you diddle and fiddle around and suddenly there is an idea, but maybe not. Most of the time there is an idea. Just record it to get it off your brain, so to say 'system clearance.' [Laughs] When I don't record it, then it's forever in my head. It's causing me sleepless nights. I have to record it, then I erase it from my hard drive up there in my stupid head. I know that the boys are pretty much the same, everyone is diddling and fiddling around. It's still a hobby. My guitar, that's my life. I was forced to the microphone. I never wanted to be a singer. I wanted to be a guitarist. Now, the only occasion to play guitar is at home writing songs. [Laughs]"

Listen to the entire interview using the audio player below.