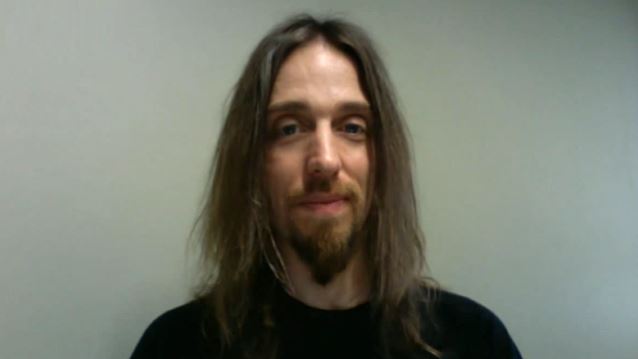 On March 30, SOILWORK drummer Dirk Verbeuren took part in a question-and-answer session with fans via the Nuclear Blast Records YouTube channel. You can now watch the 90-minute chat below.

Speaking about SOILWORK's upcoming studio album, which is once again being produced by Jens Bogren, who also worked on the band's last two CDs, "The Living Infinite" and "The Panic Broadcast", Dirk said: "There's some really fast stuff on there. There are definitely some really blistering tracks that, for me, in my opinion, have a feel similar to the 'Steelbath Suicide' [1998] and 'The Chainheart Machine' [2000] era. At the same time, they're different as well, because, you know… I mean, it's a different lineup now [and] we're not trying to do stuff like we did before. We just kind of write music and do what we feel, and the way it comes out is the way it comes out. So it's not a planned strategy to write one way or another. But, yeah, there's some fast stuff and there's some intense stuff. I think, overall, the album is gonna be pretty blistering, to say the least."

Asked how the new SOILWORK music compares to that on "The Living Infinite", Dirk said: "I would say it's both darker and heavier, in my opinion — at least what I've heard from it. Bear in mind that I've only heard pretty much raw demos. I haven't heard many vocals at all, I haven't heard many keyboards. When we work with the songs, they kind of take life as we record them. As I'm the first guy who always starts with the recording — 'cause we begin with drums — I usually don't see the full picture until everybody else comes out of the studio. And they're in it right now, so… But, yeah, I think the album has a pretty dark undertone. There's some really different things on it, and then there's some really typical SOILWORK things on it. So, yeah, I think it's gonna turn out really good. I'm really excited about it."

Dirk also spoke about SOILWORK's mindset going into the songwriting process for the new album. He said: "We just kind of got together and put some stuff down that really came from the heart without worrying too much if it was gonna be too much like this or too much like that. We just really wrote what we felt and I'm really excited about it. I think the new songs are gonna turn out fantastic."

Regarding a possible release date for SOILWORK's new CD, Dirk said: "The plan right now is to have it out in the fall. So if we just stick to our schedule… We're currently in the studio. So, you know, things could fluctuate, but if all goes well, you'll have it in the fall."

SOILWORK released its first live DVD/Blu-ray, "Live In The Heart Of Helsinki", on March 13 via Nuclear Blast. The disc was recorded during the band's special show on March 21, 2014 at Circus Club in the Finnish capital and features guest appearances by Floor Jansen (NIGHTWISH, REVAMP) and Nathan J. Biggs (SONIC SYNDICATE). The DVD was produced by Jouni Markkanen and directed by Ville Lipiäinen, who also worked on the most recent NIGHTWISH DVD, "Showtime, Storytime".