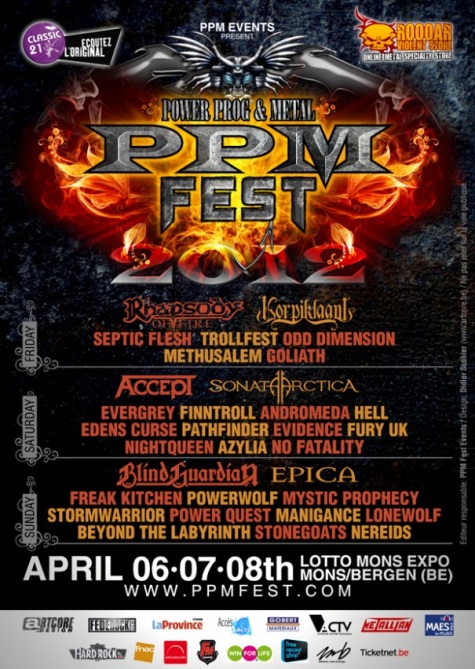 Video footage of Finnish melodic metallers SONATA ARCTICA performing a new song, "I Have A Right" at the PPM Fest, which was held April 6-8 at the Lotto Mons Expo in Mons, Belgium can be seen below.

"I Have A Right" is the first single from SONATA ARCTICA's new album, "Stones Grow Her Name", which will be released on May 18 via Nuclear Blast Records. The CD was recorded in several studios all over Finland, mixed at Sonic Pump Studios by Mikko Karmila and mastered at Chartmakers by Svante Forsbäck. The effort will be released as a limited-edition digipak, standard jewel case, vinyl and download.

Commented SONATA ARCTICA vocalist Tony Kakko: "I've had a very hard and work-filled two-year period writing the songs while touring extensively with our previous album, 'The Days of Grays'. But it has all been worth it!

"Yet again we are introducing new things to keep the music alive and interesting. New elements, styles and new moods, talented quest artists and ideas for the enjoyment of the loyal friends of our music."

Gunnar Sauermann, a writer for the German edition of Metal Hammer magazine, was one of the first media people to hear a rough-mix version of "Stones Grow Her Name" at this past February's Finnish Metal Expo in Helsinki. He comments, "SONATA ARCTICA was never more exciting and more versatile as on 'Stones Grow Her Name'. Every single song is a hit!"