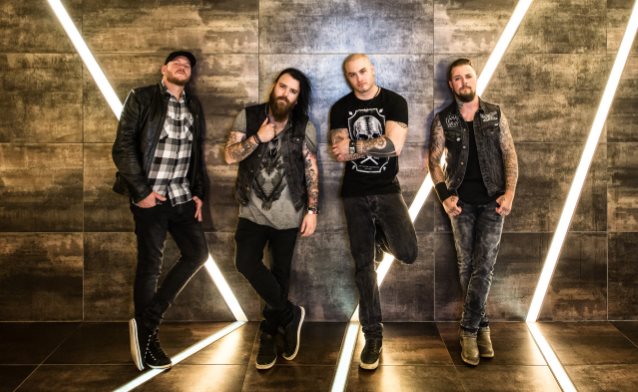 The first in a series of video clips from the studio can be seen below.

SONIC SYNDICATE announced its new recording and publishing deal with Despotz in February. The band's vocalist Nathan J Biggs stated at the time: "As you could imagine, we are super excited to be signing to Despotz Records based here in Stockholm, Sweden. We couldn't imagine a better place to call home.

"When the possibility of us working together first came up with this modern, creative and forward-thinking team, we pretty much had our mind set that this was where we belong.

"This is an exciting new chapter for both SONIC SYNDICATE and Despotz."

Despotz is a Swedish metal/rock/pop record label / publishing company which was founded in Stockholm in 2007 with artists such as RAUBTIER, THUNDERMOTHER, CRUCIFIED BARBARA, TAD MOROSE, BESEECH and many more.

Despotz co-founder and managing partner Carl-Marcus Gidlöf comments: "We at Despotz have recently taken the label international and have locked in fresh new exciting opportunities in North America with Sony / RED / Aisa. This signing further proves that our plan to work internationally, based here in Stockholm, directly with our artists combined with a strong PR/marketing and distribution setup is the future of Despotz. SONIC SYNDICATE share our vision, we've already had a number of creative conversations and we're looking towards an exciting future. We're honored to welcome SONIC SYNDICATE to the Despotz family."