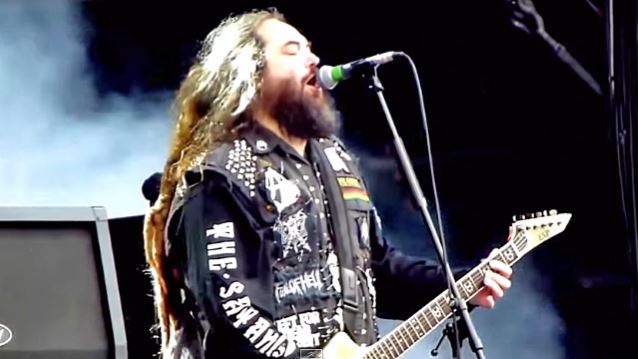 The lyric video for the song "Sodomites" from SOULFLY can be seen below. The track is taken from the band's tenth studio album, "Archangel", which will be released on August 14 via Nuclear Blast Entertainment. The CD was produced by Matt Hyde, who has previously worked with SLAYER and CHILDREN OF BODOM. The cover artwork was created by artist Eliran Kantor (TESTAMENT, ICED EARTH, SODOM).

Said SOULFLY mainman Max Cavalera: "I wrote this track about the wrath God which struck down Sodom for their sinful behavior. I used quotes from the Old Testament in some of the lyrics. It was also really exciting to work with Todd from NAILS on this track since I'm a big fan!"

In an interview with Metal Wani, Max called "Archangel" "an interesting record." He explained: "It's one of those [records] that come out once in a lifetime, an album like that comes out — really crazy sounds and very different dimensions. It's more experimental than the other stuff. It's still heavy as hell, and it's still fast. And Zyon's [Cavalera, Max's son] playing drums on it. He's actually playing really good. He reminds me of a young Dave Lombardo [SLAYER]. The fills that he's doing [are] really amazing; he surprised everybody in the studio. Matt Hyde is producing; he worked with SLAYER before. So it's really cool; a really good team."