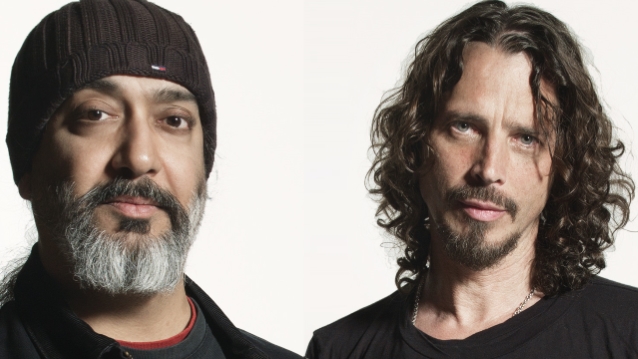 SOUNDGARDEN's KIM THAYIL On CHRIS CORNELL: 'It's Important To Recognize The Breadth Of His Work Over Time'

"It's important to recognize the breadth of his work over time," Kim said. "From the younger, wilder, more aggressive music of his youth, to his solo work as an older man and a father that was more contemplative of that maturity and that role. And then there's the years in between, where he was growing, experimenting and taking more risks, creatively and emotionally. That gives the listener so much insight into the body of music: being able to hear how he transformed through the material, and similarly how the material transformed throughout his life.

"Singers have a difficult job. It's a very self-conscious role and they're putting themselves out there through the voice, which is an intimate instrument to be disclosing, so you have to make sure it’s done right and reflects well on you. And then there's the fact what you are singing about is often highly personal.

"He knew what he could do, we all did," he continued. "But he liked to pursue the areas he wasn't as strong at too. He was more inclined to take that challenge with his instrument. There was a point when people started saying, 'He's a great singer — perhaps the greatest singer in rock,' and that's when he began to really focus on being as good a singer as he could be, so he could be even better."

The three remaining members of SOUNDGARDEN, along with METALLICA, FOO FIGHTERS and members of AUDIOSLAVE, performed together for the first time since Cornell's May 2017 death at a benefit concert honoring the singer in January at the Forum in Los Angeles.