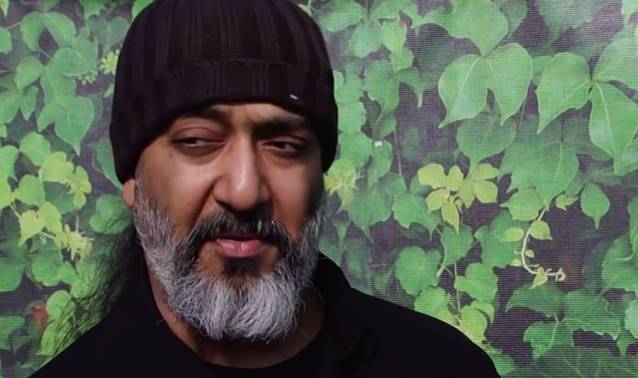 Did SOUNDGARDEN guitarist Kim Thayil take a slight jab at SMASHING PUMPKINS mainman Billy Corgan in a recent interview with the Dallas Observer? Thayil seemed to be continuing the low-level war of words between the two acts when he remarked that SOUNDGARDEN wasn't the kind of band that is "led by one guy who does all the writing."

Thayil elaborated, "We don't have one member who is deciding the composition of an album. You should know who I am talking about, but I am not going to name names. We have four guys who write songs here. We have four guys contributing material without someone calling bullshit on it."

The guitarist added, "There are many bands out there that are led by one guy who does all the writing. He might have some religious epiphany or some psychedelic experience and he will write all this material that can very easily suck. And the rest of his band feels like they have to play it."

Drummer Matt Cameron told The Pulse Of Radio a while back two things that he thinks made SOUNDGARDEN special then and now. "In our scene up here in the Northwest in the '80s and '90s, we were sometimes considered to be the RUSH of Seattle, just because we could sort of play our instruments maybe better than most bands," he laughed. "We never really tried to flaunt any musical chops, but we always had pretty diverse tastes. We had a lot of really cool influences amongst ourselves that we tried to infuse in the music."

The Corgan-SOUNDGARDEN beef started in 2007, when SOUNDGARDEN singer Chris Cornell — according to Corgan — questioned the legitimacy of Corgan relaunching the PUMPKINS at the time with only half the original lineup.

When SOUNDGARDEN itself reunited in 2010, Corgan accused them of cashing in, saying, "There are those bands that are essentially coming back only to make money…When SOUNDGARDEN came back and they just played their old songs, great. I was a fan of SOUNDGARDEN, but call it for what it is. They're just out there to have one more round at the till."

SOUNDGARDEN did make a new album, "King Animal", in 2012 and is planning another one, while Corgan has made several new records under the PUMPKINS banner.

Corgan plans to release two new SMASHING PUMPKINS albums before the end of 2014, while SOUNDGARDEN is currently on tour with NINE INCH NAILS.