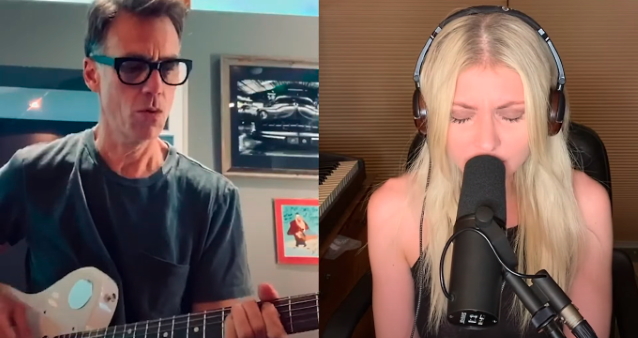 SOUNDGARDEN drummer Matt Cameron has teamed up with THE PRETTY RECKLESS singer Taylor Momsen to record a cover version of SOUNDGARDEN's "Halfway There" as a tribute to Chris Cornell, who died three years ago. The accompanying video, shot in quarantine, features Cameron on guitar and Momsen on vocals. The song originally appeared on SOUNDGARDEN's 2012 comeback album "King Animal", which marked the band's first collection of new tunes since 1996's "Down On The Upside".

THE PRETTY RECKLESS opened for SOUNDGARDEN in Detroit on May 17, 2017, a couple of hours before Cornell apparently committed suicide by hanging. He was 52 years old.

Momsen is a longtime fan of SOUNDGARDEN, having previously said that the Cornell-fronted outfit was the band for which she most wanted to open for.

Shortly after Cornell's death was made public, Momsen wrote in an Instagram post that her "heart is broken. Still in a state of shock," she added. "I have no words right now except my heart pours out to his beautiful family and friends."

THE PRETTY RECKLESS also posted a tribute to Cornell on the band's Twitter, writing: "Our deepest sympathies to family and new friends we just had the privilege to join for an all-too-brief moment. Our hearts are with you."

Two days after the Detroit concert, THE PRETTY RECKLESS was due to play at the Starland Ballroom in Sayreville, New Jersey but postponed the show as a result of Cornell's passing.

In January 2019, Momsen appeared with the three surviving members of SOUNDGARDEN at the "I Am The Highway: A Tribute To Chris Cornell" show in Los Angeles.