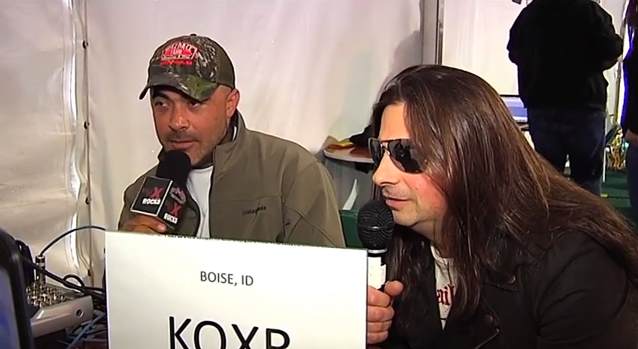 STAIND: Back On The Road, But Not Ready To Start Working On New Songs

Nic and Big J of the Boise, Idaho radio station 100.3 The X Rocks spoke to vocalist Aaron Lewis and guitarist Mike Mushok of Massachusetts rockers STAIND at the Rock On The Range festival, which is being held May 16-18 at the Columbus Crew Stadium in Columbus, Ohio. You can now watch the chat below.

Asked what it's like playing with STAIND again after the band took a two-year break from touring, Aaron said: "It's kind of like getting back on a bicycle. And it's the only bicycle you've had your whole life. Very familiar. I mean, by the end of two rehearsals, having not played together or even thought about these songs for over two years, we were ready to go." Mike added: "We had these offers to do these shows, and we knew that's what it was going to be, Aaron was going to continue with what he was doing. But it's good to get back out there for a little bit. Like I said, the promoters that do these festivals came and asked us to do them, and we''ve always had such a good time doing them, so here we are."

Aaron and Mike also spoke about the relationship between the two of them and the rest of their STAIND bandmates. Aaron said: "In all honesty, we talk when we need to talk. And everybody is friendly. When we go home, we go home. I don't see him the whole time we're off. We live a couple of hours from each other, and we both have kids and we both have crazy lives of our own that we need to integrate ourselves into when we go home. I mean, shit, Old School [Johnny April], the bass player, lives 15 minutes from me. It had been two years since I had seen him when we got together to rehearse. It's just we all have our own stuff going on." Mike added: "Especially once you have kids and stuff. It's, like, every day there's something going on, you know what I mean?! When you are away and you're home, you just wanna spend as much time with the kids as possible."

Lewis added: "I think it's crazy to sit in your dressing room with your cigarette on the big, long, '101 Dalmatians' freaking tip, with your cognac, sipping your cognac in a silk bathrobe when you were supposed to hit the stage an hour before, and of the mindset of, 'I'll hit the stage when I want to.'"

In a new interview with the Midland Daily News, Mushok made it clear that STAIND's recent touring break was not due to any bad blood — they just needed a break and wanted to work on other things for awhile.

"[Aaron] wanted to pursue his country career," Mushok said. So the band took a little more than a year off.

Mushok, who kept himself busy, writing music for documentaries and ESPN and recording and touring with NEWSTED, the project led by former METALLICA bassist Jason Newsted, said that there will be a follow-up to STAIND's 2011 self-titled album, but there's no timetable.

"It's got to be something that Aaron wants to do," Mike said.

"I always enjoy writing with [Aaron] and I look forward to it.

"We complement each other. He makes what I do better. Hopefully, I give him something that he wants to sing over.

"That relationship in the songs, that's bigger than any argument."

The STAIND bandmembers had a difficult time making their latest record, with the group in turmoil and the sessions eventually leading to a split with founding drummer Jon Wysocki.

The album debuted at No. 5 on the Billboard album chart and marked the end of the group's deal with Atlantic Records.

Lewis said the band would explore its options during the hiatus, adding that it would take "a ridiculous, ridiculous check for me to be willing to sign a label deal again."