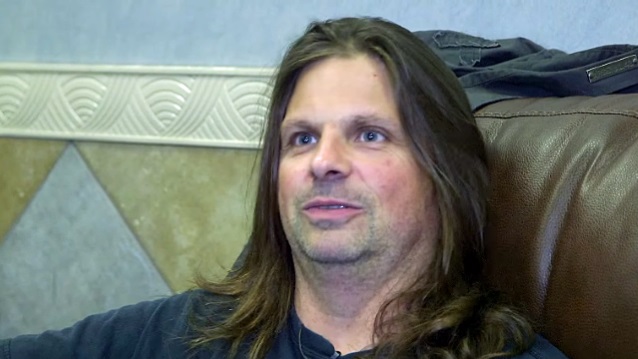 Although STAIND performed at the Rock On The Range festival in Ohio this past May and played a few other shows earlier this year, the band does not have any plans at the moment to begin working on the follow-up to its 2011 self-titled album.

Asked in a November 7 interview with New Jersey's WDHA-FM 105.5 FM radio station if STAIND is planning to debut any new material at its upcoming shows, guitarist Mike Mushok said: "As far as STAIND goes, no. I mean, there is no real new material."

He continued: "I was actually trying to do this thing where I was writing with different singers, and Aaron [Lewis, STAIND frontman] was one of those singers that I was talking to.

"But, no, as far as that goes, there is… as of right now… [Our live set s] gonna be, basically, based upon our almost-20-year career at this point — you know what I mean?! — and seven records. So we just try to put together… I mean, there's songs that you kind of have to play. And we're actually fortunate to have some of those. So those will obviously be in there. And then we just try to… We were all real happy with the way our last record came out — I can't even say 'new'; it's been over three years. But those are just a lot of fun to play. And so we always try to put together the best set we can."

Lewis told The Pulse Of Radio a while back that the members of STAIND don't really see each other when they're not working. "We're business partners and we always have been," he said. "We're not friends that have known each other forever. We've known each other to start this band and, you know, when we go home from being on tour, I don't talk to anybody and they don't talk to me until it's time to do something and there's a need to talk to each other. It's a business; it always has been a business."

Mushok told the Midland Daily News about the band's future, "It's got to be something that Aaron wants to do. I always enjoy writing with [Aaron] and I look forward to it. We complement each other. He makes what I do better. Hopefully I give him something that he wants to sing over."

Lewis has pursued a solo country career for several years, while Mushok has composed music for ESPN and some documentaries while also touring in NEWSTED, the band launched by ex-METALLICA bassist Jason Newsted.