STAIND Releases 'Mudshovel' From Upcoming Album 'Live: It's Been Awhile'

Multi-platinum rock band STAIND has released a live version of "Mudshovel" from its upcoming album, "Live: It's Been Awhile", due out May 7 via Yap'em/Alchemy Recordings. Listen to the song below.

The classic "Mudshovel" is from STAIND's 1996 debut album, "Tormented", which led to the band's first record deal with Flip Records.

There hasn't been a gig since we first wrote this song in '96 where we haven't played 'Mudshovel'," says STAIND guitarist Mike Mushok. "It's definitely become a fan favorite, and I have as much fun playing it now as I did back then."

"These were the first grouping of shows we played together in 2019, when we were gearing up for what was to be a very busy 2020...that never happened," says STAIND lead vocalist and rhythm guitarist Aaron Lewis. "I'm glad we captured that energy here and can share it with those who couldn't be at Foxwoods."

STAIND will also perform its iconic multi-platinum 2001 album "Break The Cycle" in its entirety for a May 8 streaming event, exactly 20 years after the album's release. The "20th Anniversary Of Break The Cycle, Performed In Its Entirety" takes place at Mill 1 in Open Square in Holyoke, Massachusetts, bringing the band back to their Western Mass roots. Please note, this is a fully virtual event, with no in-person attendance.

"Our first show together in 1995 was at a now defunct bar called the Waterfront in Holyoke," says Aaron. "We played mostly covers, because that's what you had to do back then. Turns out The Waterfront is two miles from where we did this. Here we are, two miles down the road, 26 years later, celebrating the anniversary of the album that helped us break though 20 years ago and altered our lives forever."

Purchase tickets for one or both of the STAIND global streaming events at StaindLive.com. Fans can also purchase bundles and VIP experiences, including exclusive merchandise, a custom STAIND guitar autographed by the entire band, and a virtual meet-and-greet with the band.

After a five-year hiatus, STAIND roared back on the scene in 2019 with a series of electrifying live performances, including DWP's Louder Than Life and Aftershock festivals.

"'Break The Cycle' was huge — in 2001, it debuted at #1 with over 700,000 copies sold in its first week – but it's more than just a hit record. It's a defining moment for the genre, the way it flows from beauty to heaviness — and Aaron Lewis was the perfect instrument for those melodies, those lyrics. Nobody in the genre could match the dynamics of Aaron's voice," says Danny Wimmer, founder of Danny Wimmer Presents. "When STAIND came back in 2019, they sounded as good as ever, and the fan demand for what the band had planned for 2020 was through the roof. Now in 2021, there's no way we were going to miss this opportunity to celebrate 20 years of such a pivotal record, and carry that momentum into the next era of STAIND."

In 2019, Lewis said that new STAIND material would likely sound "pretty brutal. It would be continuing back to how heavy we were to begin with, when 'It's Been Awhile' and 'Outside' and 'So Far Away' and songs like that, that were radio songs, confused everything. 'Cause if you came and saw us at a show, the show was a hell of a lot heavier than most of the songs that you would hear on the radio. And I would have to say that it would be going back in the direction of just heavy… I think I've got some pent-up stuff that would probably flow out quite nicely over some of Mike's [Mushok] heavy riffs."

"Live: It's Been Awhile" track listing: 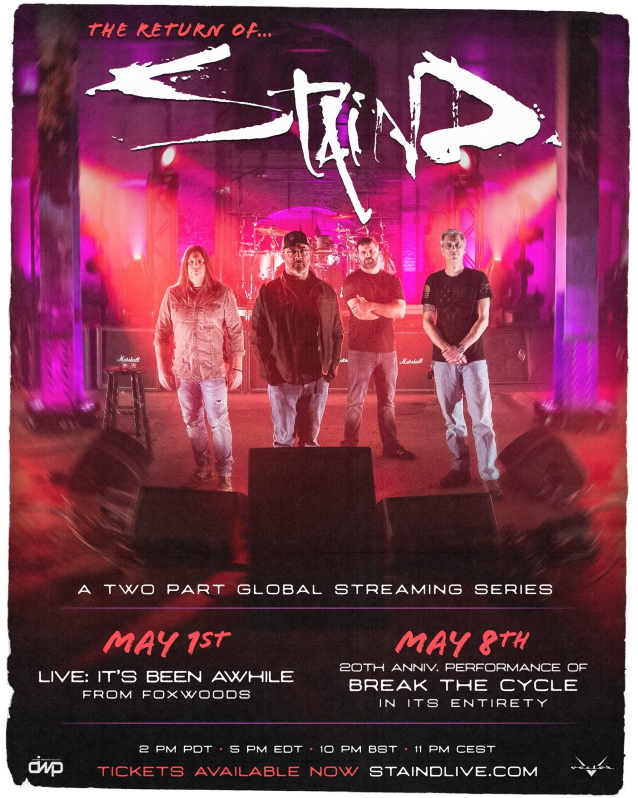