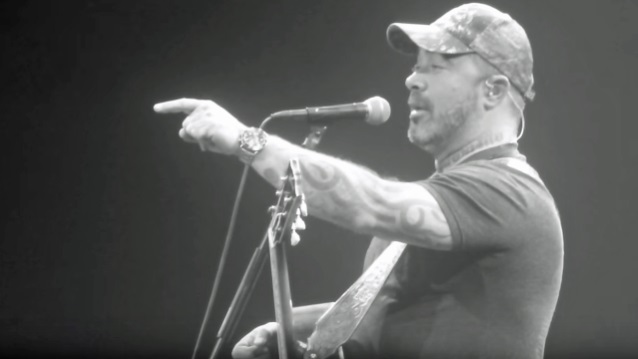 Aaron Lewis has fired back at Wes Borland, calling the LIMP BIZKIT guitarist a "bougie motherfucker" who didn't appreciate being reminded where he is from.

The feud between Borland and the STAIND frontman apparently started last December when Wesgave an interview to the "Talk Toomey" podcast and the subject of Lewis was broached.

"Aaron Lewis came up to me in an airport randomly," Borland recalled. "I was visiting my parents in Jacksonville and flying back to L.A. And… I just happened to run into him and hadn't seen him in awhile. He goes, 'Where are you headed?' And I went, 'I'm going home.' And he goes, 'Home?' and I went, 'Yeah, I just visited my parents. I'm going back home to L.A.' And, for the record, I've lived in L.A. longer than I've lived in any other city in my life. And he goes… Aaron looks at me and he kind of turns his chin up and he goes, 'Nah, man. Remember where you came from. Florida is your home, not L.A. That's home.' And I just went, 'Fuck you, man.' And I never talked to him again after that."

Pointing out that the incident in question took place "way before" Aaron launched his country solo career, Borland continued to vent his feelings about the fellow musician.

"That guy is such a dickhead," Wes said. "So full of himself, such a dickhead. I wish nothing but the worst for him. Amen. I could not believe the audacity and just, like, pretentiousness — especially for somebody that acts like they're like a country boy now and they're from Illinois. Anyway, digusting person. No, thanks. Peace."

Wes went on to say: "I don't wanna a shit talker, but I have no problem talking shit about that guy. He's terrible."

This past weekend, Lewis performed a solo concert at The Orleans Showroom Theater in Las Vegas, Nevada and took the opportunity to respond to the LIMP BIZKIT guitarist. Prior to playing the song "Outside", which he originally performed live during the 1999 "Family Values" tour with LIMP BIZKIT's Fred Durst providing backing vocals, Lewis addressed Borland's comments and offered his version of what happened to cause Wes to take offense.

"I'm gonna sing this little ditty," Aaron said (see video below). "I laid it down back in 1999. I don't remember, but I do know that I walked into the dressing room of LIMP BIZKIT.

"Wes Borland, who I love dearly, who obviously has some fucking things to say about me. Fuck that motherfucker! I know that I started this with 'I love him dearly,' because he's part of the whole reason that I'm standing here right now in front of you," apparently referring to the fact that STAIND was actually "discovered" by Durst and was signed to his Flip label imprint two decades ago. "And I find it really fucked up that…

"I saw this motherfucking bougie motherfucker riding on a fucking golf cart in an airport to his gate. I ended up at a gate really close to him. I went up to him. I said, 'Wes, what's up, brother? I miss you. I haven't seen you in forever. How have you been?' Good,' this, that and the other thing. I'm, like, 'Where are you headed?' He's, like, 'I'm headed home — to Los Angeles.' And I'm, like, 'Hey, motherfucker, that ain't home. Remember — you're from Jacksonville, fucking Florida.' That's how it went down."

Aaron continued: "Have you seen the interview? Have you heard the podcast? That's how it went down.

"And for that — for that — for reminding my brother, one of the people that are responsible for me standing in front of you this evening, reminding my fucking brother where the fuck he's from… And now I'm the biggest piece of shit to ever fucking walk the face of the earth," Lewis added. "So, you know what? Wes Borland, you bougie motherfucker, I give all the credit to this next song to Fred. Fuck you."

**UPDATE**: In response to this article, Borland wrote on Instagram: "Hopefully this means that I never have to endure interfacing with him again."