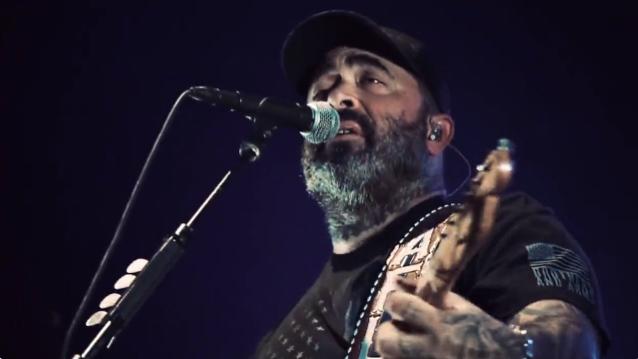 STAIND frontman Aaron Lewis, who is widely considered to be one of the most politically conservative musicians in rock, told the Anchorage Press in a recent interview that he considers the impeachment of President Donald Trump by the House Of Representatives as the clearest representation of what's wrong with America these days.

"The agendas they're pushing now have caused more deaths than all the wars that have taken place in the world, so do yourself a huge favor, understand your history and know what the Constitution says," Lewis argued. "What [Congress] just did to your country couldn't have been more unconstitutional in shape or form."

The 47-year-old rocker Lewis doesn't believe his decidedly conservative leanings are that unusual, considering the fact that older adults tend to have more conservative political views and are more likely than younger adults to support Republican candidates and issues.

"It's hard for me not to as I get older — that's kind of how it happens. As life becomes clearer, you have more responsibilities," Aaron said. "You bring kids into the world, and if your views aren't changing to more conservative and protective of the country and the life you've provided for your children, you just have not been paying attention."

He added: "I'm sure that [some STAIND fans] don't feel the same way as I do. The way I look at is if I offend you with my point of view, then good — you need something to snap out of this slumber."

At some his recent solo shows, Lewis has been dedicating the song "Gods And Guns" to Congressman Adam Schiff, House Speaker Nancy Pelosi "and everybody else trying to tear this country to shreds."