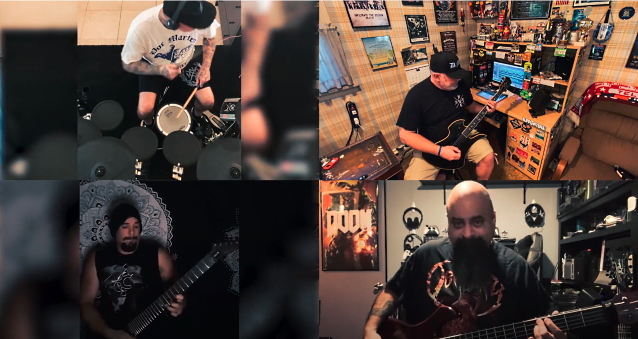 Former and current members of STATIC-X, SOULFLY, MADBALL and D.R.I. have joind forces to record a "quarantine jam"-style cover of the SEPULTURA song "Manifest" from the Brazilian band's 1993 classic album "Chaos A.D." The lyrics were re-written to touch on 2020 issues of police brutality in the U.S., specifically the Breonna Taylor case from March of this year.

The project was initiated by Walter "Monsta" Ryan. Recording was done individually and mixed by Brian "Mitts" Daniels. The video was edited and put together by MichaelxCrusty, with additional filming by Gina Dalberth.

In a 2008 interview with Kerrang! magazine, former SEPULTURA frontman Max Cavalera stated about the original inspiration for "Manifest": "'Manifest' is very close to me. That's about a massacre of prisoners by police at a jail in São Paulo. One hundred and eleven prisoners were killed, and one of my friends was there and took pictures of it all, one of which we used in the artwork."