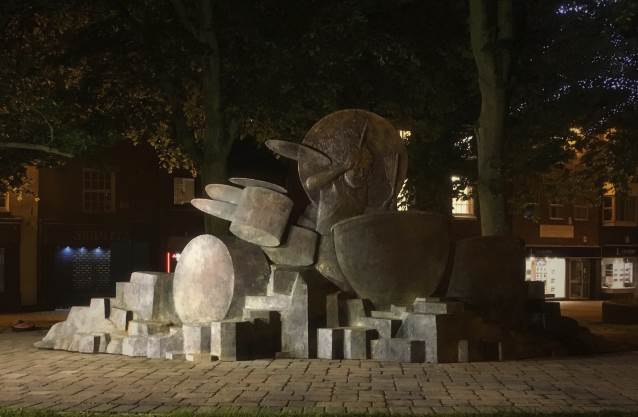 A statue of LED ZEPPELIN's John Bonham has been unveiled in his home town of Redditch, England on what would have been his 70th birthday.

The majority of the funds for the memorial, which was created by sculptor Mark Richards and is situated at Mercian Square in Redditch town center, came from a private donor.

The six-feet-high and 16-feet-wide bronze sculpture, which depicts Bonham seated behind his kit, weighs more than five thousand pounds and is covered in anti-graffiti paint.

The sculpture, set on a plinth inspired by LED ZEPPELIN's album "Houses Of The Holy", is emblazoned with the words: "The most outstanding and original drummer of his time, John Bonham's popularity and influence continue to resonate with the world of music and beyond."

His younger sister, Deborah Bonham, who spearheaded the campaign, told the BBC that she was "absolutely thrilled."

Mark Richards took to Twitter this morning to confirm that the statue was installed, writing: "Delighted that my memorial sculpture to John Bonham was installed over night in Redditch town centre. Thanks to all who helped make this happen."

Delighted that my memorial sculpture to John Bonham was installed over night in Redditch town centre. Thanks to all who helped make this happen. #johnbonham#johnbonhammemorial#johnbonhambirthday#redditchpic.twitter.com/VG3HOr2ubl

A new statue has appeared overnight in Redditch.

It’s paying tribute to the Led Zeppelin drummer John Bonham, was was born in the town and would have been 70 today: pic.twitter.com/2qS4fTxaP5