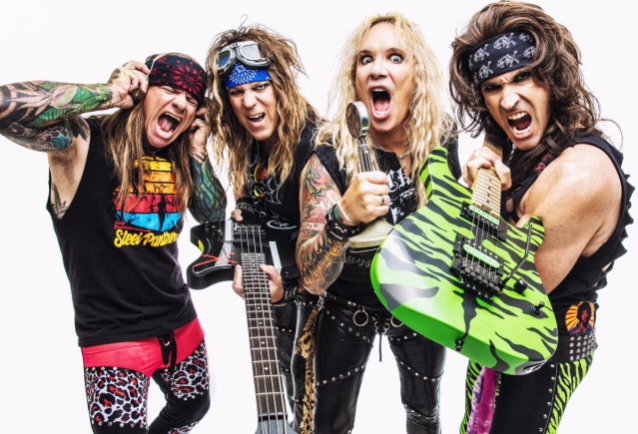 Spyder and the STEEL PANTHER guys have known each other for decades. But it was in 2018 that Spyder did his first live show with the band. Little did they know that those shows would be a foreshadowing of what destiny had in store for their collective futures. In 2021, the band found themselves in a pickle; they needed a bass player. An exhaustive search brought many submissions and fans were treated to a variety of bassists on different tours. The band had even considered a few well-known bassists to fill the void. Throughout the five-week European tour in summer of 2022, it became quite evident to all four guys that this lineup was unstoppable. A few more months of touring together perfected the new lineup and now anyone that has seen the band recently knows that Spyder is the perfect addition to STEEL PANTHER.

STEEL PANTHER said in a statement: "We wanted it to be you. We wanted it to be you so badly. So, it's not gonna be easy. It's gonna be really hard. We're gonna have to work at this every day, but we want to do that because we want you. We want all of you, forever, you and us, every day. To us, you are perfect. You had us at hello. You complete us. We're gonna need a bigger boat."

To coincide with the new bassist announcement, STEEL PANTHER has announced a U.S. tour, "Claus & Paws Holiday Party". The eight-city trek will kick off in late November after the band wraps up its recently announced Canadian leg of the "Res-Erections" tour 2022.

Just three months ago, STEEL PANTHER singer Michael Starr and drummer Stix Zadinia discussed their search for a permanent replacement for their original bassist Lexxi Foxx in an interview with RAMzine. Michael said: "We tried out over… We had how many video submissions… probably [over 700]. And we went through every single video. And we did some test runs with some people. And when we find the right guy, you guys will know."

During an appearance on an episode of the "2020'd" podcast, STEEL PANTHER guitarist Satchel stated about Lexxi's departure: "We didn't want him to quit. Nobody wanted him to quit, including a lot of fans. I'm sure a lot of fans are very sad that he left. But he's the guy who left the band. I think he's got his own things he's dealing with, and he just wanted to go and do that. So, I don't know… I can't answer for Lexxi Foxx. But we will all miss Lexxi Foxx, and we all wish him the best in everything that he does. But we didn't fire him; he quit the band. So we're gonna have to move on and get somebody else who's younger and foxier and doesn't need as much Botox," referencing the drug doctors have been using for years to treat wrinkles and facial creases.