California glam metal jokesters STEEL PANTHER are back with another livestream concert event on October 31, "The Halloweenie Ride Livescream". The concert event will be live from the iconic Viper Room in West Hollywood, California, a new location for STEEL PANTHER's livestreams but an old home in the band's history. The show will be live globally at 2:00 p.m. Los Angeles time, 5:00 p.m. New York City time, 10:00 p.m. (22:00) London time, 11:00 p.m. (23:00) Berlin time, 5:00 a.m. (Monday morning) Hong Kong time and 8:00 a.m. (Monday morning) Sydney time. Tickets for the 'livescream" concert are $15.00 in advance and $17.00 day of show.

"The Halloweenie Ride Livescream" is guaranteed to bring back Halloween from the dead. The band has filmed a series of all new sketch comedy pieces that will be played throughout the show, giving the virtual experience more depth and laughs. The band will again be interacting with fans around the globe via a live chat. All fans who purchase tickets to the concert will get access to STEEL PANTHER's Rockbuster Video Store. The Rockbuster Video Store will be a place where fans can access exclusive content to stream for a period of time. Currently, "Rockdown In The Lockdown", "The Concert To Save The World" and the classic "Live From Lexxi's Mom's Garage" will be available with ticket purchase and more content will be added. All Fanther fan club members will get a free ticket to the event. The "You Can't Beat The Meat & Greet" VIP upgrade is also available that includes access to a virtual one-on-one meet-and-greet, private video chat with all four bandmembers and a screenshot selfie.

"The Halloweenie Ride Livescream" is being sponsored by Monster Energy and all tickets and VIP upgrades are available here.

STEEL PANTHER says: "Carve your scariest jack-(off)o-lanterns. Get your sluttiest Halloween costume on and prepare for the all the musical tricks and treats you can handle in one livestream. It is also the one day a year where no one bitches about having to wear a mask. It's better than a Ferris wheel or a water slide. It's 'The Halloweenie Ride Livescream'."

This past August, STEEL PANTHER played its second virtual concert event, "Rockdown In The Lockdown", from the ultra-sanitized, production-filled, multi-camera Drum Channel Studio at Drum Workshop, located in Oxnard, California. The performance was streamed live globally. 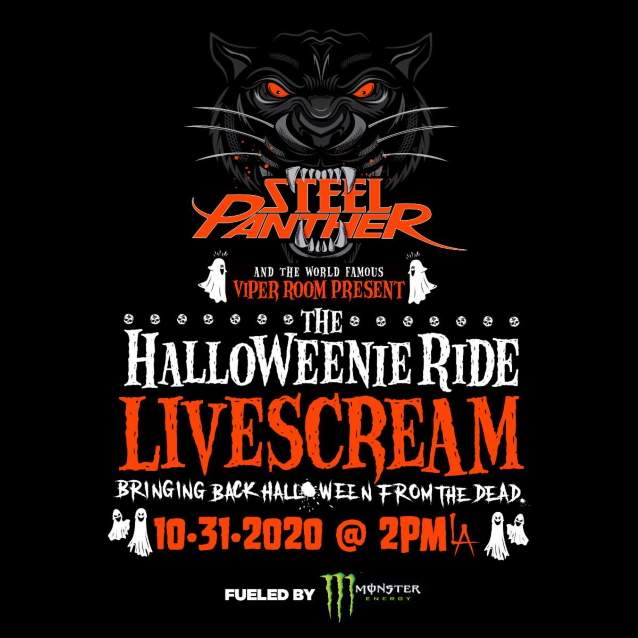