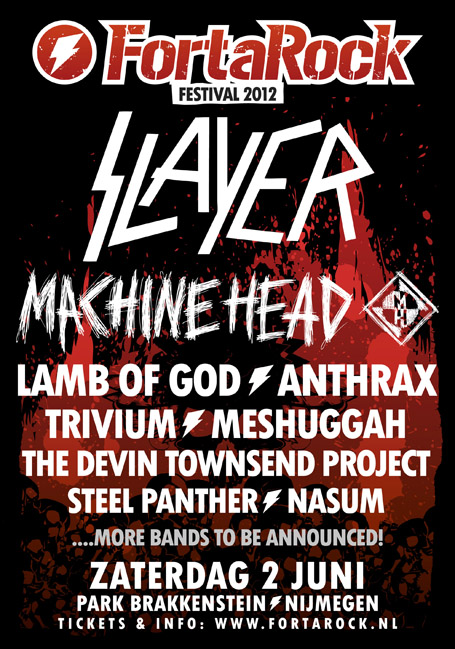 Quality fan-filmed video footage of STEEL PANTHER's June 2 performance at FortaRock at Park Brakkenstein in Nijmegen, Netherlands can be seen below.

Check out photos from Metal-Experience.com.

STEEL PANTHER's sophomore album, "Balls Out", sold nearly 12,000 copies in the United States in its first week of release to debut at position No. 40 on The Billboard 200 chart. Released on November 1, 2011 via Universal Republic Records, the follow-up to 2009's "Feel The Steel" contains 14 soon-to-be classics such as "Just Like Tiger Woods", "Gold Digging Whore" and "Weenie Ride". The album also features cameos by Dane Cook on the album opener "In The Future" and NICKELBACK frontman Chad Kroeger and EXTREME axeman Nuno Bettencourt show up on an instant classic "It Won't Suck Itself". "Balls Out" was produced by Grammy-nominated producer/mixer Jay Ruston who produced the band's "Feel The Steel" debut and is known for his work with ANTHRAX, MEAT LOAF, THE DONNAS and MORRISSEY, to name a few.

When asked what lessons STEEL PANTHER learned from its 2009 debut, "Feel The Steel", that he and his bandmates applied to this new album, guitarist Satchel told Guitar International, "It's funny because we haven't learned any lessons from our first record. We don't even think of it as our sophomore album, we think of it as our second debut release. Many bands will try to make a different-sounding record for their second release, but we couldn't really get any better than our first record. Our first record was awesome, so we decided to go in and make the same record for our second album, just better. We didn't really grow as writers. We didn't grow as musicians. In fact, I think I got a little bit worse . . . But because of that it's much better. It's kind of like a fine wine. If you let it sit there and let it get moldy, that's what they do with wine, right? Then you let the mold fester in the bottom of the bottle, that's what our music is like on this record. We're like a moldy cheese that's been left out in the sun all summer. You wouldn't think that it would taste good at the end of the summer, but surprisingly, it does. That's us in a nutshell."