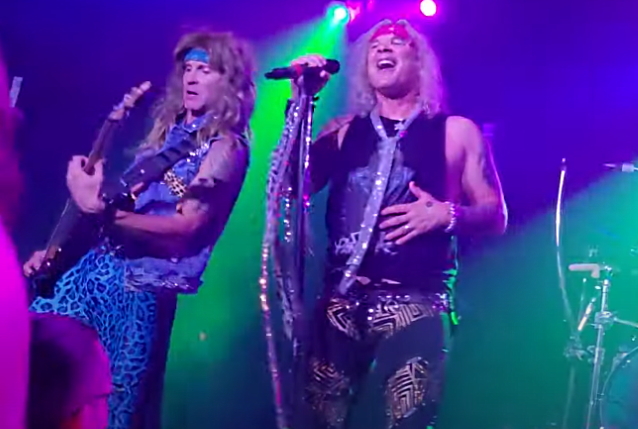 STEEL PANTHER singer Michael Starr says that the band has yet to secure an official replacement for longtime bassist Lexxi Foxx.

Although STEEL PANTHER played several of its recent shows with a bassist named Rikki Dazzle, Starr insists that he and his bandmates are still on the lookout for someone "permanent."

Earlier today, Michael took to his Instagram to share the following message: "After getting 432 texts this morning regarding my last post about Rikki Dazzle being our permanent bass player, I went back and had my assistant read me the actual headline. I must have been super stoned, but to be clear: We are still in the audition process. Rikki killed it hard and he will be hard to beat, but when we finally decide who the permanent guy or girl is, we will make an official announcement. Until then, stay high and rock hard."

Earlier this month, Lexxi — whose real name is Travis Haley — told Rocking With Jam Man that he hadn't spoken with his former bandmates since his exit. "I still talk to the singer a little bit; I have in the past," he said. "But I think that those scars and I think that the departure, the way that it went down, I think there's some sore spots. But that's tough for me to talk about.

During an appearance on a recent episode of the "2020'd" podcast, STEEL PANTHER guitarist Satchel stated about Lexxi's departure: "We didn't want him to quit. Nobody wanted him to quit, including a lot of fans. I'm sure a lot of fans are very sad that he left. But he's the guy who left the band. I think he's got his own things he's dealing with, and he just wanted to go and do that. So, I don't know… I can't answer for Lexxi Foxx. But we will all miss Lexxi Foxx, and we all wish him the best in everything that he does. But we didn't fire him; he quit the band. So we're gonna have to move on and get somebody else who's younger and foxier and doesn't need as much Botox," referencing the drug doctors have been using for years to treat wrinkles and facial creases.