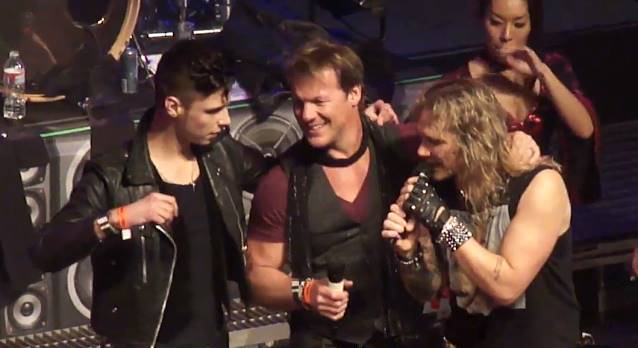 Chris Jericho (FOZZY) and Andy Biersack (BLACK VEIL BRIDES) joined STEEL PANTHER on stage this past Monday, April 14 at the House Of Blues in Hollywood, California to perform the SCORPIONS classic "Rock You Like A Hurricane". You can watch video footage of the performance below (courtesy of Heavy Metal Hill).

Regarding naysayers that say STEEL PANTHER is a joke-metal band, the group's drummer Stix Zadinia told the South Bend Tribune: "Listen to our record and tell us that our songs aren't better than most of the bands out there. How funny is that? At the end of the day, it comes down to the songs. I think our songs — without sounding egotistical — I think our songs are great. When you hear the hooks in our songs, you hear the playing and you hear the vocals, you throw that up against any band in any era, and I think it stands up."