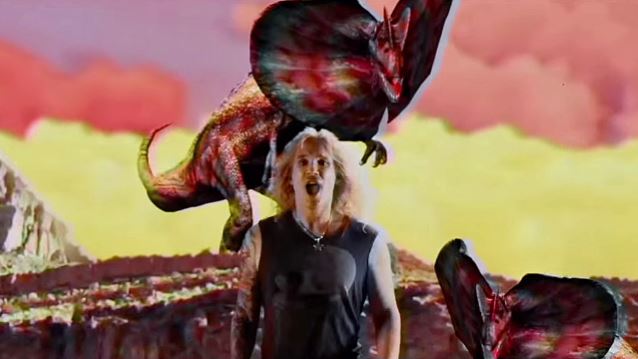 STEEL PANTHER started out as a glam rock parody group called METAL SKOOL that performed an insanely popular night on the Sunset Strip. Every musician and A-list celebrity in Los Angeles wanted to sit in on their crazy, anything-goes shows.

Because of their raunchy videos, they've become legitimate Internet stars on YouTube and have traveled the world bringing their personas to countries that probably weren't aware of the tongue-n-cheek nature of their performances. Yes, there's a bass player who holds a mirror on stage to always check his hair and a lead singer who invites his fans to come on stage and go topless for romantic love songs.

Playboy gave free rein to director Sean Barrett, the creator of Andy Milonakis's surreal hip-hop videos and a STEEL PANTHER superfan, to reimagine the song "Party Like Tomorrow Is The End Of The World". He created a video where a badass Playmate space goddess (Miss September 2009 Kim Phillips) is bent on destroying STEEL PANTHER and lobs comets at them, all while they try to accept their fate along with their dinosaur, viking and pigeon friends.

A kick-ass video featuring behind-the-scenes footage from the making of "Party Like Tomorrow Is The End Of The World" can also be seen below.