Originally released in early 2012, AC/DC and Stern Pinball have made history by creating a fan-favorite pinball game and an iconic pop culture classic.

The new AC/DC LED Pro features technological upgrades implemented by Stern in its current Pro models. In addition to the LEDs and the swinging bell, the new AC/DC LED Pro is manufactured with Stern's updated modern metal and wood back box with a decaled cabinet and speaker housing. All the other great game features, art and music are unchanged from Stern's earlier AD/DC Pro.

"With the AC/DC license expiring at the end of December 2014, we wanted to offer our operators and enthusiasts a great earning game with the enhanced features that we've recently developed," said Gary Stern, chairman and CEO of Stern Pinball.

Stern is planning a small immediate production run on this upgraded game so order while supplies last.

AC/DC, more than three decades into a career that shows no signs of slowing, like electricity itself, provides the world with an essential source of power and energy. Since forming in 1973, AC/DC's high voltage rock 'n' roll has flowed into the world via consistently sold-out concert tours and global sales totaling more than 200 million albums. Sony BMG Music Entertainment's #1 best selling catalog act worldwide, AC/DC has sold nearly 71 million albums in the U.S. alone, making AC/DC one of the five top-selling bands in American music history. One of the group's best-loved works, the enormously successful and influential "Back In Black", has achieved RIAA "Double Diamond" status, with sales in excess of 22 million copies in the United States. It is the U.S.'s fifth largest-selling album ever. AC/DC's intense live performances and innovative guitar driven music are at the core of the band's 30-year legacy of great rock and roll music. 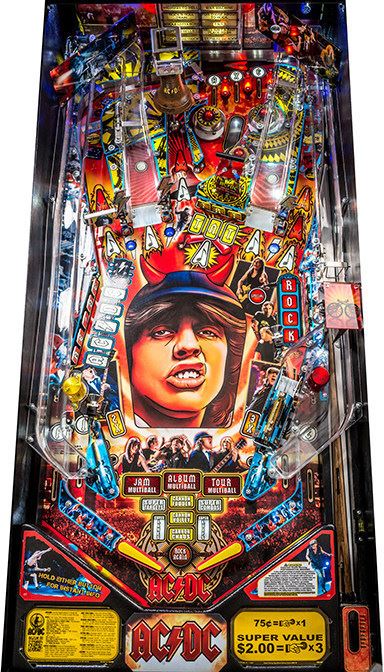