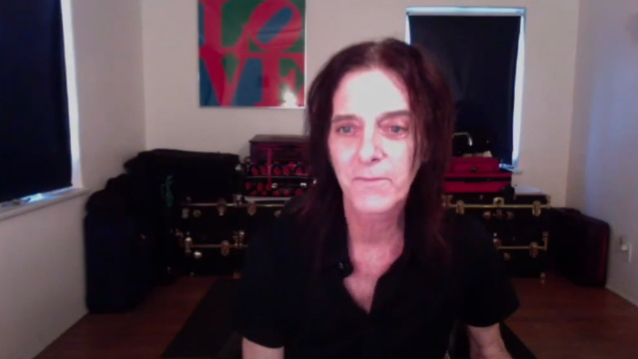 After CRÜE drummer Tommy Lee said in a recent interview that he and his bandmates tried — without success — to get Vince to sing some of the John Corabi-era MÖTLEY CRÜE material, Lewis chimed in on social media, saying that Vince "has trouble singing his own songs" and calling Neil a "total hack." The L.A. GUNS singer went on to write that he he "seen Vince live so many times" and insisted that he hates "to see people getting ripped off."

A short time later, Metal Sludge published an article headlined "L.A. Guns singer on Vince Neil's singing ability: 'Vince has Trouble Singing his Own Songs – Total Hack'", prompting Lewis to elaborate on his original comments. He wrote: "Just to be clear and in context. The subject was why doesn't Vince sing the Corabi era songs? Simple. He couldn't, doesn't have the range, power or motivation but thanks for pointing out [Vince] has sold more albums and tickets than me, Has a much bigger bank account and a gorgeous trophy wife so yes given those facts Vince must be a much better singer than I could ever be. Darn! There goes another MÖTLEY tour."

He added, "While we're on the subject. Somber Anniversary VN. Fuck you for killing my friend", apparently referring to the fact that Neil caused the tragic car accident in December 1984 that killed his passenger, HANOI ROCKS drummer Nicholas "Razzle" Dingley.

Riley, who played in L.A. GUNS' classic lineup with Lewis, discussed Phil's online outburst during an appearance on "The Chuck Shute Podcast". Asked for his opinion of Lewis's comments, Riley (see video below): "Terrible. That is such a band thing to do in this business. You're talking about one of the biggest bands in the world, one of the most iconic hard rock/metal bands in the world. I know those guys, and I have nothing but respect for MÖTLEY CRÜE — all the way through. It doesn't matter what they did, how they did it, when they did it, I have so much respect for those guys for what they did. They are immense in this scene — they are iconic — and to jump into a fray like that for no reason and say something like that is just another ridiculous thing to do. It's only gonna work against you. They have millions of fans that love them. So if you're gonna say something like that about Vince, who's a great guy… He's perfect for MÖTLEY CRÜE. He isn't Paul Rodgers — he never pretended to be Paul Rodgers. He is great for MÖTLEY, perfect for MÖTLEY; his voice is perfect for them. To say something bad about Vince is just uncalled for. I don't know why he would do that. If it's just to try to get attention or to try to get press, it's not good press — it's only gonna work against you."

Riley added: "I never believed in saying anything bad about anybody in this business. Even if it's somebody that isn't a favorite of mine, I just couldn't do that — I wouldn't go there."

Riley's version of L.A. GUNS is not to be confused with the band led by Lewis and guitarist Tracii Guns, which issued two well-received albums, "The Missing Peace" and "The Devil You Know", plus the live release "Made In Milan", under the L.A. GUNS name over the last three years.