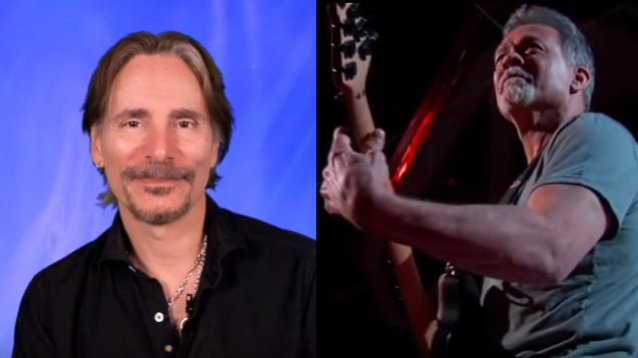 STEVE VAI: 'It Was A Complete Honor To Be Able To Play' EDDIE VAN HALEN's Parts With DAVID LEE ROTH

Steve Vai, who joined David Lee Roth's post-VAN HALEN band more than 35 years ago as lead guitarist, spoke to "CMS Music" about the musical influence and impact of legendary VAN HALEN axeman Eddie Van Halen. He said (as transcribed by BLABBERMOUTH.NET): "I'm not unlike the average Edward fan in that he really had an effect. For Edward fans that really were touched by him, it's inexplicable, obviously; you can try to use words, but it doesn't really work. It's like that with many things.

"I have a different position in that, yeah, one might say that I replaced the guitar behind the voice, but that's just academics to me," he continued. "When it comes to the way I felt about Edward and the mourning of his loss, I'm a fan, like everybody else, and I feel the way they do. But I know, also like many people, everything in this world is coming and going and coming and going and coming and going. And if it doesn't go, it only means you went before it. And we just don't know when. So that's something that helps me to get through loss, because it's gonna happen.

"But it was a beautiful, beautiful, amazing ride that he had, and he just delivered so much. And he had a great run. It's not like he died at 27. And we don't wanna see anybody like that [go]; we wanna squeeze every note out of 'em. [Laughs]

"For me, it was a complete honor to be able to play those parts," Steve added. "If you're a guitar player and you're a fan of that band, you know that those are some of the coolest guitar parts written in rock and roll, because they're like perfect little arrangements; they fall so well on your hands. They'll never sound like Edward, but they're great songs to play on the guitar 'cause they're complete. And you become a better player. Especially the position that I was in where I was playing his parts to his fans, so I had to pay deep respect to those parts, and in so doing, I discovered a really great ride there because you have to focus; it has to improve your playing. So I was really lucky in all that."

Vai previously spoke about his years as the guitarist in Roth's solo band, alongside former TALAS bassist Billy Sheehan and drummer Gregg Bissonette, in a 2016 interview with The Press-Enterprise.

"When I heard Roth was looking for a guitarist, I just knew it was going to be me," Steve said. "Billy Sheehan had recommended him to me, and I coveted the position. In my early days, I would wonder if I could get a gig. I figured I would go for it and tried out with Alice Cooper, KISS and others. But for some reason, I just knew this would be my gig and I would just have to wait for it. Sure enough, I got the call."

Even though Steve knew his technique would be compared to that of Eddie Van Halen, he never let the pressure get to him.

"You don't compete with Eddie Van Halen," he said. "He was a monolith and brought so much inspiration for me. He's a genius."

Eddie and Alex formed VAN HALEN in 1972 in Pasadena, California, with Roth on lead vocals and Michael Anthony on bass.