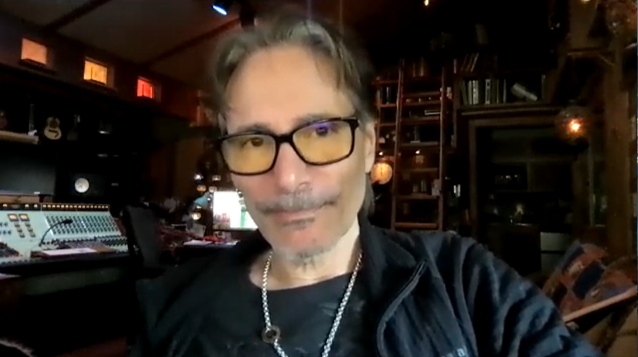 Approximately one year ago, legendary guitarist Steve Vai underwent shoulder surgery to repair an injury. That procedure was successful, enabling him to record his new album, "Inviolate". However, in preparing for a U.S. tour in support of the LP, it became clear that a new injury emerged that requires another surgery prohibiting the tour to be staged as previously announced.

Steve discussed his physical issues in a new interview with Holland's FaceCulture. He said (as transcribed by BLABBERMOUTH.NET): "The shoulder started years ago and it was something I was experiencing when I was working out. And I let it go, to the point where I kind of crossed a point of no return where therapies weren't gonna work and they had to get in there and fix it. And they did, and they did a great job. And it healed. And I made 'Inviolate'. Unfortunately, over the summer, I tore another tendon, and that's why we had to move the American leg of the tour to the fall — because I had to get another surgery. But it's all right. I'm not worried about any of that."

According to Steve, he never lost his belief that he would be able to continue writing and recording music after recovering from his surgery. "What I noticed is I didn't panic," he said. "There was never a time where I thought… Well, there was a moment after I got the sling off where I started to try to play and there was nothing there — I couldn't pick, I couldn't strum. And I thought, 'Okay, this is what it's like at the end of the day for a musician.' And for about 10 seconds, that thought, 'This is it. I'm done.' That was in my head. And I can honestly tell you that with that thought, there wasn't any fear but there was a disappointment, of course.

"I don't define myself as just a guitar player," he explained. "People say, 'Music is your life.' Music isn't my life. Music is something I do in life. Life is much bigger than what you do in it. So I never felt restricted in expressing creative musical ideas, even if I didn't have a guitar. And I always knew that that was gonna be there, no matter what. So I wasn't devastated. But then another little voice came in, the voice of my higher self — it usually comes in to the rescue — and it said, 'Shut the fuck up and just start playing. You know you got this.' And I said, 'Okay. Yes, sir.' And I just started. And it came back."

Last February, Vai revealed that he had undergone shoulder and trigger finger surgeries, explaining that his shoulder had been "screwed up."

During an appearance on Tyler Larson's "Guitar Villains" podcast, Vai said that he sustained the finger injury by holding a tough chord for too long.

"I was doing this fun thing, and I had to put my thumb in this really weird position," he said. "And I had to kind of hold this chord really for a long time — I was meditating on it. And I knew it was a hard position, and I just kept sitting there and playing it and playing and playing, and 20 minutes later, I'd kind of come out, and I [felt pain in my hand]. So I kind of sprained this, and then, all of a sudden, I developed trigger finger. My wife said, 'Don't show anybody,' 'cause they did that operation and they cut in there, and the guy's fooling around with everything in there, and it's really bizarre. But it's all fine — it's something very simple that they can fix. But I won't be able to play for a while."

The first U.S. leg of Vai's tour dates will now begin on September 28 in El Cajon, California and wrap the first week of December. The itinerary will now feature performances in 52 markets as opposed to the initial plan of staging 54 shows. All ticket and VIP purchases will be honored for the rescheduled date. Vai's performance in Atlanta, Georgia will now take place at the Variety Playhouse instead of The Eastern and due to scheduling conflicts, the Milwaukee, Wisconsin and Billings, Montana shows will no longer be a part of the tour.