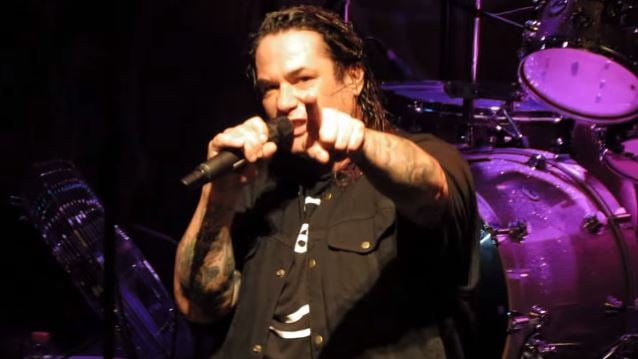 The Age Of Metal recently conducted an interview with vocalist Steve "Zetro" Souza of San Francisco Bay Area thrash metal veterans EXODUS. You can now listen to the chat using the Mixcloud widget below.

Asked when fans could expect to see a new EXODUS album, Zetro said: "I hate to speak for everybody, because one of our members [guitarist Gary Holt] plays in SLAYER, which is very important to us and to him as well. And, actually, Gary is the main songwriter and has always been in EXODUS. And so we'll have to, obviously, look at his schedule, but just having, actually, conversations with him since we've been home [off the road] and conversations with Tom [Hunting, EXODUS drummer], I mean, we know we need to keep new music going. And 2017 would be… Say it was towards the end of 2017… That would be three years since my return [to the band] and three years since [the last EXODUS album] 'Blood In, Blood Out' came out. So I think that's fair to say you should be able to put a record out in that amount of time. And we've always been able to write an album in an… like, come home and concentrate on it, and within five or six months, we have it written and done — even less [time] than that. We know what we're doing. We know EXODUS. We've been doing this for so many years. It's just like getting on a bicycle and riding it."

Souza also praised Holt, who wrote almost all of the music and lyrics for "Blood In, Blood Out" prior to Zetro rejoining EXODUS.

"Everybody in metal will tell you he's the real deal," the vocalist said of his bandmate. "He's the true thrash… He does everything: he writes [music], he plays lead, he writes great lyrics. He's just the all-around… Anybody… Scott Ian [ANTHRAX]… James Hetfield [METALLICA] will tell you Gary Holt is the all-around package. He's the utility guy; he can play infield, outfield, hit left, hit right, pitch, catch… He can do it all, which is great, and we're very fortunate to have that."

Zetro, who hasn't been part of the songwriting process on a full-length EXODUS album in more than a decade, is looking forward to putting his stamp on the band's forthcoming effort.

"I've always been a lyrical writer — always — but on 'Blood In, Blood Out', I really didn't come in until the end," he explained. "And I wrote… Actually, Lee [Altus, guitar], Jack [Gibson, bass] and myself, we were in the studio one day when I was actually doing my vocal tracks, and we all wrote 'Body Harvest', the lyrics, together. And on the past EXODUS records — I did five other studio records with EXODUS — I always wrote lyrics… always. Some records, like 'Fabulous Disaster' [1989], 'Impact Is Imminent' [1990] and 'Force Of Habit' [1992], I probably wrote 60/40 of the lyrical [content]. But I've always been a lyrical writer. In my band that I was doing with my son, HATRIOT, I wrote all the lyrics. I did that side project with Chuck Billy [TESTAMENT], DUBLIN DEATH PATROL, and I pretty much wrote all the lyrics for that as well. It's something I definitely am known for and definitely I do, and I'm sure having Gary and I collaborate on this next record is gonna really exciting for us, for the fans, for everyone. 'Cause it has been since [2004's] 'Tempo Of The Damned' where we knew we were writing a record together, and everybody loves 'Tempo Of The Damned', so we'll see what happens. I'm sure it's gonna be epic."