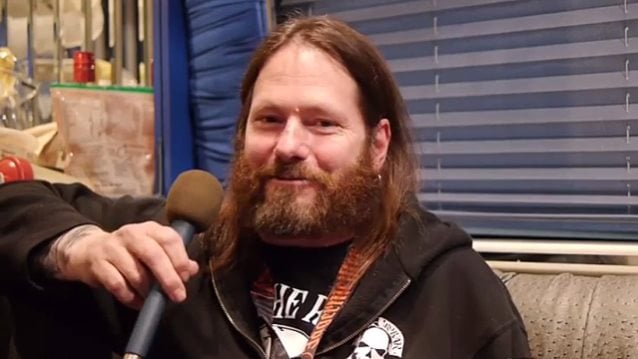 San Francisco Bay Area thrash metal veterans EXODUS yesterday announced the departure of their singer of the past nine years, Rob Dukes, and the return of his predecessor, Steve "Zetro" Souza.

EXODUS guitarist and main songwriter Gary Holt (pictured) elaborated on the band's decision to split with Rob and re-hire Zetro, explaining: "This was the most difficult decision of our lives, one the entire band made.

"This was not a majority-rule situation; that would not have worked. We all had to agree, and we all did. [There was] no pressure; everyone had to be on the same page.

"This band has all the love for Rob you could ever have for someone, [and] this was not easy.

"The details we will never bother going into. I only ask for people to be respectful both ways, for Rob and for Zetro.

"The lines of communication with the band and Steve are the strongest they've ever been. All things have been discussed — the past, present and future going forward.

"I have had the honor of watching Rob go from unknown guitar tech to awesome singer and frontman and could not be prouder, and his future is bright as fuck, that's for sure. It doesn't end here. The world will see plenty more from Rob, this much I will bank on. But as for the new [EXODUS] record, it is still in full swing.

"Steve will start [recording] vocals [for the new EXODUS CD] on Wednesday and the small sampling I have of him on the new songs is fucking amazing. His best shit ever is coming. Be prepared, it's going to kill.

"But I am well aware that as the so-called face of the band, it is I who will be blamed, the guy who masterminded it all, yada yada yada, but this was a choice made by all. And the most fucked up thing is doing this, it wasn't easy.

"None of us have ever been good at this shit, despite all the lineup changes over the years.

"Rob's contributions are some of the best stuff this band has ever did, a big part of this band's return, and we are grateful."

Back in March of this year, EXODUS entered a studio in Northern California with producer Andy Sneap (MEGADETH, KILLSWITCH ENGAGE, ARCH ENEMY, NEVERMORE) to record the band's tenth studio album. A month later, Dukes told Patch.com about the material that was slated to appear on the CD: "This album is very fast and has more of a punk rock feel to it, whereas I think the last few EXODUS albums were metal epics, with longer songs. These songs are shorter and a little faster. It has a really different feel to it. It sounds great."

EXODUS' next live appearance is scheduled for July 11 at the Bang Your Head!!! festival in Balingen, Germany.

Souza, who previously fronted EXODUS from 1986 to 1993 and from 2002 to 2004, left EXODUS ten years ago on the eve of the band's South American headlining tour over what was described as long-standing business and personal differences. Holt subsequently issued a statement calling Souza "human crap" for pulling out the trek "only about twenty-four hours before were ready to leave." He added, "Yes, he did a killer job on the [then-latest] album [2004's 'Tempo Of The Damned'], but mainly because we did not allow him to fuck everything up with his stupid Bon Scott impersonations anymore. We made him sing more like [previous vocalist Paul] Baloff. I tried to make it work. More than you can imagine. But he was (is) the most miserable pile of crap to be around."

After Souza made it clear in several interviews in 2011 that he wanted his old EXODUS job back, Holt — who has been pulling double duty with SLAYER for the past four and a half years — said: "I have nothing against Zetro; really, I don't. I consider him a friend, but the lobbying through the press for people to convince me to give him his job back just got under my skin, because Rob is NOT a placecard holder in EXODUS, he's our singer.

"Zetro's place in EXODUS history is solid, he made some great records with us, and had a good run with the band. But this is now, not then, and we do not plan on throwing away what we have to go back in time."

He continued: "Do I love singing those songs? Yeah, for the fans, it would be great. I sing some of those with HATRIOT. I've done so much work with [HATRIOT], I can do everything my way…

On Sunday, HATRIOT released the following statement regarding Zetro's return to EXODUS: "This is great news and we are very happy about it and this will not stop HATRIOT at all. Zetro will be doing both bands. We are still going to be creating music, playing shows and staying an active band. We look forward to the European tour next month."