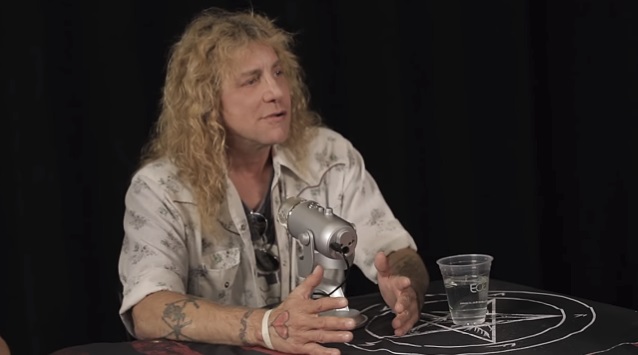 STEVEN ADLER On Getting Kicked Out Of GUNS N' ROSES: I Was So Heartbroken, I Wanted To Die

Steven Adler says that his "heart was so broken" after he was fired from GUNS N' ROSES that he just "wanted to die."

Adler, who was famously kicked out of GUNS N' ROSES in 1990 for his rampant drug use, spoke about his dismissal from the band on "Mom, It's Not Devil Music!", where he appeared alongside Sumerian Records founder and "American Satan" writer/director Ash Avildsen and actor/musician BooBoo Stewart, who plays Vic Lakota in the movie.

"One day you're on top of the world, and the next day you're a nobody," Adler said of the music industry (see video below). "The movie 'American Satan' is the closest thing I've ever seen to actual reality."

Admitting that drugs were his "downfall," Adler recalled his final recording session with GUNS N' ROSES and the circumstances that led to his departure from the band.

"One day I just went, 'This isn't cool. I don't wanna do this anymore,'" he said of his decision to quit doing drugs. "And I didn't realize that if you're doing heroin and then you stop doing it, you get violently sick — violently sick. Like, the inside of your bones ache — the inside of your every bone, it aches so bad and you just wanna die. And I called my manager and I said, 'Dude, I'm so fucking sick. I don't understand what's going on.' So he came and picked me up, he took me to this doctor, and the doctor gave me an opiate blocker. Well, you're not supposed to take an opiate blocker while you have opiates in your system or you get even more violently sick.

After he was fired from GUNS N' ROSES, Adler "went from having a management, roadies, a band, agent, accountants — people all around me all the time — that I thought were my friends and had my back to literally, one day, I was all alone. I had nobody," he said. "I thought for sure I was gonna be one of those rock stars that, when they're 27, they O.D. and die."

According to Adler, "the '90s were the worst" period for him. "The '90s sucked for me," he said. "Once I got kicked out of GN'R, I had to sign this contract. They took everything from me. I didn't know that. Then I had to take them to court. Losing them is what made me go off the end. I was gonna clean myself up, because I was just tired of it. I was just old and I didn't like being sick and tired, so I went and jumped right in head first. I could have either said, 'Okay, I'm gonna go exercise and clean myself up and do this,' but my heart was so broken that I couldn't even think about doing that. All I could think about was, 'I just wanna die.'"

Adler recalled one particular out-of-body experience that happened after he slipped into a coma due to the ravages his drug abuse brought on.

"I have no veins, so when I was shooting heroin, I would get so frustrated, I would just shoot it in my arm, and it got infected," he said. "So one day, I decided to go to a liquor store to buy soda pop for once instead of alcohol — I actually was going to buy soda. And I drove off the driveway, I went around the corner and I smashed into seven parked cars. I ended up stopping in the middle of the street, got out of the truck, I fell on the floor. And I just remember floating above my body in the hospital room with my friend and the doctor and my mom, I could see myself floating around, and they took the knife and they [cut into my arm] and seven different colors of puss came out. And it smelled so bad that the lady in the next bed, she had to leave. And I was floating up above my bed; I was seeing all this happen. And then I went to a heaven — nirvana, heaven, whatever they call it… And I know you're all gonna think I'm crazy — whatever. It was so beautiful. And it had colors that they don't have on this planet. And some lady came up to me and said, 'We're not ready for you.' And I came back. And I woke up in the hospital all taped up. And the doctor [told me], 'You were lucky.' I didn't try to kill myself that time. There was one time when I did, and I did O.D. The moment I was 'dead,' I did go to a hell — so there is a hell and a heaven. And this hell was like different caves — like, I had to have different tests to go on to the next line to get through this giant cave. And once I got there and they said, 'You have to do this test,' I just saw [makes the shhh sound] and I just came back. I've heard people say, 'If you kill yourself, you go to hell.' So I was trying to kill myself and I almost did. I went through what was hell."

In 2010, Adler released a tell-all autobiography, "My Appetite for Destruction: Sex, And Drugs, And Guns N' Roses", in which he delved into the brutal depression and humiliation borne of his botched suicide attempts, his drug-related heart attacks, and the debilitating stroke that caused him muscular paralysis and permanently slurred speech.

Steven rejoined GUNS N' ROSES at several shows on the band's "Not In This Lifetime" tour, including three separate stops on the U.S. leg and one gig in Buenos Aires, Argentina, playing drums on the classics "Out Ta Get Me" and "My Michelle".

Adler is currently working on a new book called "Steven Adler: The Shit My Friends Remember I Did". The former GUNS N' ROSES drummer spoke about the project during an interview with Eric Blair of "The Blairing Out With Eric Blair Show". He said: "I was doing drugs for the last 25 years — well, not the last [four], but before, for 25 years, I drank, I did drugs — and now that I'm sober, I'm talking to people and they're telling me stories, and it's just blank up there [in my head]; there's nothing there. So I decided I'm gonna put a book together [as a] reminder of the stories."

Adler recently started a web site called Steven Adler Stories where fans can share their personal tales about the drummer for possible inclusion in the book. All submissions should be between 20 and 125 words.