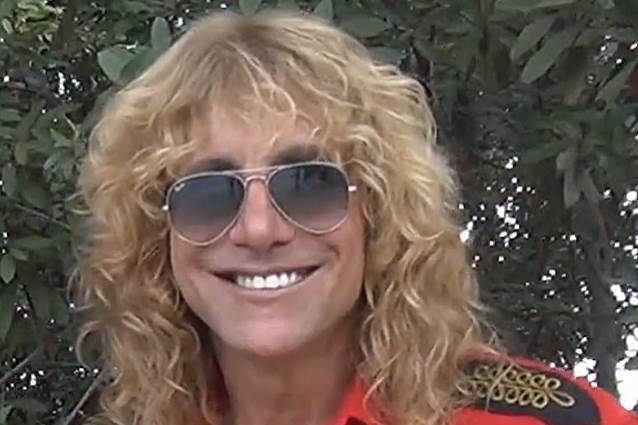 Meltdown of Detroit's WRIF 101.1 FM radio station recently conducted an interview with former GUNS N' ROSES drummer Steven Adler. You can now listen to the chat at this location.

Steven, who played with GN'R from 1985 to 1990, was famously kicked out of the band for his rampant drug use. And although he's made a few guest appearances with Axl Rose, Slash and Duff McKagan on the "Not In This Lifetime" reunion tour, he wasn't invited to return to the group full time.

"It was so amazing to be able to play for so many people who love our music," Adler told WRIF about his appearances on the "Not In This Lifetime" trek. "I wish I played some more, but at least something is better than nothing. And I love those guys, and I'm so proud of what we accomplished. 31 years later, people still love our music."

Speaking about the enduring appeal of GUNS N' ROSES' classic debut album, 1987's "Appetite For Destruction", Adler said: "We accomplished our goal. Our goal was to make a record — actually, make records — just like the bands that we grew up with, like QUEEN and KISS and AEROSMITH and IRON MAIDEN. We wanted to make a record that we would listen to, and the coolest part is we did it, and everybody else felt the same way.

"The stars were definitely aligned for us," he continued. "We met each other at the right time; we were in the right place at the right time; we met the right people at the right time; and I thank the gods — all the gods, and especially the gods of rock — for bringing five people with five completely different personalities, five completely different musical influences, but all had the same goal: to put a kick-ass rock band together that people loved, like the bands that we loved. And we did it. And it took five different personalities and five different musical influences to make that record happen. And I wish they never changed the recipe; they kind of took the sugar out and put a little salt in, and nobody likes anything sweet with salt in it. Like I said, I'm just thankful I was a part of it. Something is better than nothing."

"I think Axl should have called it W-A-R [which stands for W. Axl Rose] instead of GUNS N' ROSES," Adler said. "But then if he called it W-A-R, it wouldn't have sold any records. But having the GUNS N' ROSES name, he was able to sell this to you. That was really a solo record. There wasn't one person from the original band on it. I think there were probably 20 people playing on it and it took 17 years to make. That's more like a solo record."

Steven went on to say that he didn't believe Axl's touring activities with his new version of GUNS N' ROSES did much to enhance the band's legacy.

"I think the music that we made in the beginning of our career is what kept the name alive, because definitely him doing 17 years of nothing to make a record, I thought for sure he was gonna come out with 'Bohemian Rhapsody' or 'The Wall' or 'Quadrophenia'," Adler said. "I thought, '17 years to make a record. This is gonna be 'Quadrophenia' or 'Dark Side Of The Moon',' one of those great records. But it was just Axl's solo record."

Still, Adler acknowledged that "Chinese Democracy" had some good material on it. "Because [Axl] is great," he said. "When you're great, you're great. But 'Appetite' sold a hundred million records, and that one sold five hundred thousand. So… there you go."

He added: "Axl is really talented and very smart, and I love him. I wish I could give him a hug and a kiss, but I can't see him.'

Another former GUNS N' ROSES member not taking part in the "Not In This Lifetime" tour is guitarist Izzy Stradlin, who reportedly turned down a five-figure fee to play with GUNS N' ROSES at the April 2016 reunion shows.

"Izzy I talked to about two months ago," Adler told WRIF. "He just buys old cars, fixes 'em up, drives cross country to his ranch — he's got a ranch in Indiana or something. He has a talen for living, Izzy. Living takes a talent, and he's got talent for life."

Steven is currently working on a new book called "Steven Adler: The Shit My Friends Remember I Did".

He described the book on "The Blairing Out With Eric Blair Show", saying: "Now that I'm sober, I'm talking to people and they're telling me stories, and it's just blank up there [in my head]; there's nothing there. So I decided I'm gonna put a book together [as a] reminder of the stories."

Adler started a web site called Steven Adler Stories where fans can share their personal tales about the drummer for possible inclusion in the book.

GUNS N' ROSES has just kicked off a seven-week European tour. The three core members — Rose, Slash and McKagan — have not given a single interview together.