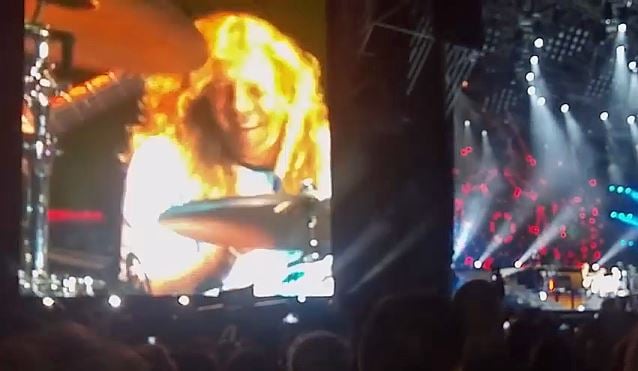 Drummer Steven Adler rejoined GUNS N' ROSES on stage again Saturday night (November 5) at River Plate Stadium in Buenos Aires, Argentina to perform one song: "My Michelle". Fan-filmed video footage of his appearance can be seen below. The previous night (Friday, November 4),Adler played "Out Ta Get Me" with the group at the same venue.

During the U.S. leg of GN'R's "Not In This Lifetime" tour, Adler played "Out Ta Get Me" and "My Michelle" on three separate occasions. Those shows marked Adler's first appearances with GUNS N' ROSES since 1990, although he performed with members of the band at their 2012 induction into the Rock And Roll Hall Of Fame.

Until he performed with the group on the summer tour, speculation about Adler having some sort of involvement in the GUNS N' ROSES reunion had been rampant ever since the band made it official with a surprise April 1 show at The Troubadour in Los Angeles.

Back in July, Slash spoke of how things were going on the road. "We were all pretty positive that that would never happen so it's still sort of blowing our minds," Slash said during a radio interview. "It seems so surreal to me, but everybody's really getting along great and I think everybody's come a long way and it's all cool."

Adler said in October 2015 that he would be the last person to hear about his involvement in a GUNS N' ROSES reunion because Slash couldn't trust him to keep the information secret. "I've known for Slash thirty-what… thirty-nine years, and he knows that I would climb to the [highest] mountain and I would do, as Paul Stanley would say, 'shout it out loud,'" he said.

Adler told VH1 Classic's Eddie Trunk in a separate interview last year about the possibility of his involvement in a GN'R reunion: "I love those guys, and I always will, but Duff, he doesn't think I'm cool. And Slash, he doesn't believe that I have [two years] sober. He doesn't believe it. I don't know why, but they forget that at one time in their life, they were doing drugs and drinking and they were fucking up. They forget that they were like that too. Duff has got 20 years sober or more, Slash has got, like, 11 or 12 years sober, and I've got [two years]. So everybody gets it at a different time. I'm just thankful I got it."