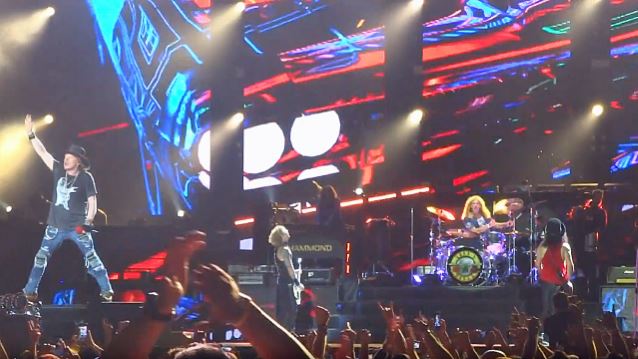 Drummer Steven Adler performed with GUNS N' ROSES for the third time on the "Not In This Lifetime" reunion tour earlier tonight (Friday, August 19) at Dodger Stadium in Los Angeles, California, where he once again joined the group onstage to play drums on "Out Ta Get Me" and "My Michelle".

Adler previously played with GUNS N' ROSES on July 6 in Cincinnati and July 9 in Nashville.

These three shows marked Adler's first appearances with GUNS N' ROSES since 1990, although he performed with members of the band at their 2012 induction into the Rock And Roll Hall Of Fame.

Speculation about Adler having some sort of involvement in the GUNS N' ROSES reunion has been rampant ever since the band made it official with a surprise April 1 show at the Troubadour in Los Angeles.

Last month, Slash spoke of how things were going on the road. "We were all pretty positive that that would never happen so it's still sort of blowing our minds," Slash said during a radio interview. "It seems so surreal to me, but everybody's really getting along great and I think everybody's come a long way and it's all cool."

The current U.s. leg of the "Not In This Lifetime" tour concludes on Monday (August 22) in San Diego, California.

#NotInThisLifetimeTour#GnFnR#LosAngeles
Steven Adler participando de Out Ta Get Me e My Michelle. pic.twitter.com/ZNHMnSpZEm

A photo posted by Stephanie Cabral Photography (@stephaniedcabral) on Aug 20, 2016 at 2:23am PDT