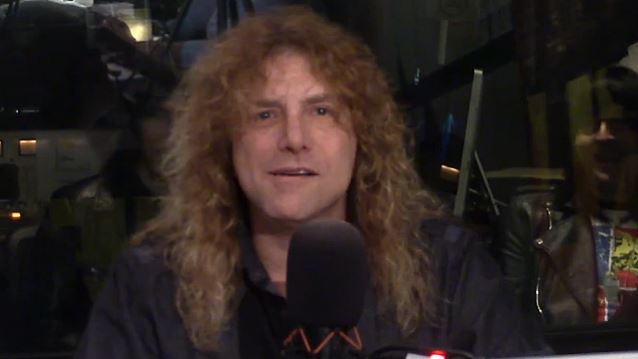 During a recent interview with Canadian rock journalist Mitch Lafon of the "One On One With Mitch Lafon" podcast (Facebook page),former GUNS N' ROSES drummer Steven Adler spoke about where he stands with respect to the possibility of a reunion of the band's classic lineup.

"As of today, I have four hundred and four days sober, and I have never been happier, I have never played better or had more fun playing," he said. "I mean, if we did ever do a reunion, or if we even made a record again together, the GN'R guys, I think it would blow [GUNS N' ROSES' classic 1987 debut album] 'Appetite For Destruction' away. All of us are such better players. And when we did 'Appetite', we were only adults for maybe three or four years. And that's from our experiences in life, that's what we came up with. Now we've been adults for 30 years, and I've been through ups and downs, like an emotional roller coaster. I have a lot to write about, and I know the other guys, if we got together, being adults now and knowing what we know, and [having] been through what we've been through, I think we could make an even bigger kickass record."

Adler also commented on current GUNS N' ROSES guitarist Richard Fortus's recent statement that singer Axl Rose would never take part in a reunion of the band's classic lineup for the money but only get involved if it was done for the "art."

"That's nice to say he wouldn't do it for the money, but if he needs a reason to do it, I have a billion reasons, and that's a billion people around the world who love us and have supported us and want more than anything to see us," Adler said.

"I think if we did a reunion show, or shows, it would definitely be for the fans. I mean, we've lived our dream lives. Everything we dreamed about we have experienced — good or bad. Sometimes you don't know what you want when you dream things. But we've experienced it and done it. We owe it to the fans."

Adler went on to say that he still feels as hopeful about the possibility of a classic GUNS N' ROSES reunion as he did prior to the band's induction into the Rock And Roll Hall Of Fame.

"I'm at the same place," he said. "I'm just so thankful and blessed that I got to be a part of something that was so great and something so magical. That doesn't happen every day. There's probably a million bands, but there's only maybe two or three or four real magical bands. And I feel the same way."

He continued: "It's Axl's call on doing a reunion. It's all up to him. And I love him and I have his back, and I support him in everything he does except for if he doesn't wanna play for the fans, I can't support that. 'Cause it's all for the fans. If he says it's not for the money, it's for the art — it's for the fans. That's what it's for."

Adler added: "I would love to finish what I started with them. Like MÖTLEY CRÜE, they're doing their last tour. They started something, and they finished something. And to go out that way, it's gotta be magic. To look back on [your time in the band] and say, 'I had a great career. God really blessed me.' Plus [THE ROLLING STONES'] Mick Jagger and Keith Richards hated each other. They still hate each other, but they're still playing music 52 years later, because they know what they've got. They have something that's magical, and the fans love 'em."