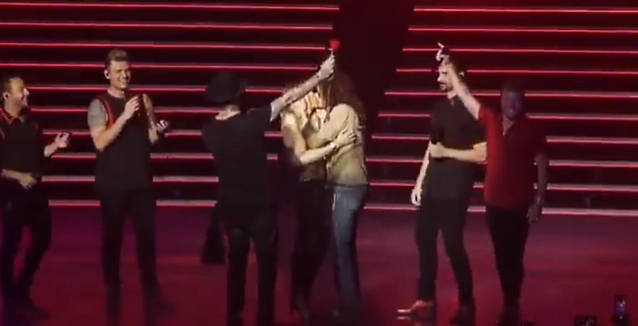 The AEROSMITH singer made an appearance after the BACKSTREET BOYS presented a female fan with a rose, as they usually do, while performing the song "Shape Of My Heart". This time, the fan turned out to be Aimee Ann Preston, Tyler's girlfriend.

Tyler, who is in the middle of doing a Vegas residency with AEROSMITH, later tweet a video of him on stage with BACKSTREET BOYS, along with the caption: "HEY I THOUGHT I WAS ONLY DOING 3 SHOWS A WEEK IN VEGAS. TOOK THIS ONE TO SEE THE @backstreetboys CONCERT MY WAY!"

AEROSMITH kicked off its "Deuces Are Wild" Las Vegas residency on April 6. The band is scheduled to play 29 more shows in Las Vegas dates before the end of the year — three in April, five in June, four in July, four in August, four in September, four in October, seven in November, and two in December. The band also has multiple-night "Deuces Are Wild" engagements booked at MGM properties in National Harbor, Maryland; Atlantic City, New Jersey; and Springfield, Massachusetts.

In addition to the "Deuces Are Wild" shows, AEROSMITH is scheduled to make two festival appearances this summer: July 14 at the Roxodus Music Fest in Edenvale, Canada; and July 19 at the Twin Cities Summer Jam in Shakopee, Minnesota.

HEY I THOUGHT I WAS ONLY DOING 3 SHOWS A WEEK IN VEGAS 😀 TOOK THIS ONE TO SEE THE @backstreetboys CONCERT MY WAY! 😍 pic.twitter.com/cXi5AoZOV9