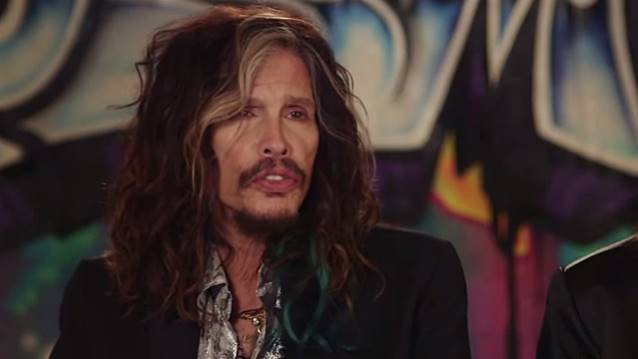 Says Tyler in a statement to Billboard.com: "At this exciting new time in my career, there was need for a big change. After meeting and getting to know Larry and Rebecca and seeing that we all share the same vision, I knew it was the perfect time for me to work with people who truly have my best interest and well-being in mind. I look forward to making incredible history together and having FUN while we take over the world, work and travel on the most adventurous journey you could ever imagine."

AEROSMITH guitarist Joe Perry recently said about Steven Tyler: "I think he loved being on 'American Idol' and loved the fame. It made me realize that what's important in his life is different from what's important in my life. And I have to accept that. The important thing is when we get up there on that stage for two hours, we're the same people we were when we were nineteen years old. That's a pretty amazing feeling."

"As far as the music goes, [Steven is] very much into pop and getting things meticulously perfect," Perry added. "I'm into just letting things rip. That's the dynamic."

Tyler will spend the first few months of 2015 working on material for a solo album. "I'm going down to Nashville [in] January, February, March, April to write and see what we get," he said during a video question-and-answer session at Twitter's headquarters in San Francisco on October 3. He added: "You know, doing an album is kind of like panning for gold. You get so much sand and dirt until you find a little nugget and you work on the nugget. I always go backwards, you know? 'Living On The Edge', why? Or 'Janie's Got a Gun', why? Who's Janie? And then it works. You fill in the blanks."

He continued: "I grew up with the EVERLY BROTHERS. So even 'Cryin''s got a little [sings with an exaggerated twang] 'There was a time when I was brokenhearted.' It started like that — of course I had to do it AEROSMITH-ish, which was more rocked out — but there's a piece of me that just loves country so much. And I'm not sure what kind of country that is, but it's got the fifth harmony, and anyone who knows who the EVERLY BROTHERS is — it's those kinds of melodies that are just so, so good."

Tyler told The Pulse Of Radio last year that his plans to go out on his own should not be a cause of concern for AEROSMITH fans. "I'm just doing a solo record because I think it's kinky, you know, to go write a song with Johnny Depp," he said. "I think it's ridiculous to go, you know, write a bunch of songs that I started five years ago and never finished. It feeds my passion, you know. But, no, the band's not breaking up. Me doing a solo record doesn't mean the band's not working on a record, you know what I mean? But I get that in the press one has to hear that from one lead singer of one AEROSMITH."

Tyler issued his first-ever solo song, called "(It) Feels So Good", in May 2011 while serving as a judge on "American Idol".

AEROSMITH's latest album, "Music From Another Dimension!", came out in November 2012 and debuted at No. 5 on The Billboard 200 album chart, selling 63,000 copies in its first week of release.