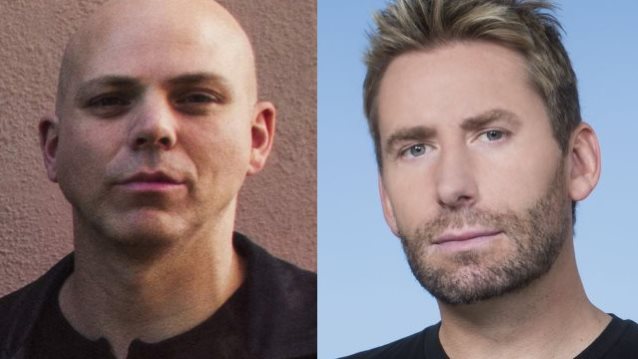 STONE SOUR guitarist Josh Rand has responded to NICKELBACK frontman Chad Kroeger after the latter blasted STONE SOUR as "NICKELBACK Lite." Asked about the remarks in a new interview with Musik Universe, Rand said (hear audio below): "There's no sense in me tearing into [Chad]. It's obvious he'd been drinking the entire time he was doing the interview.

"I don't understand why… for him to basically say we're 'NICKELBACK Lite' is… I don't know if I can fire back with anything. [Laughs] He's kind of come up with the ultimate insult, so how do I…? I mean, I don't know what else to say.

"How I took it was the interviewer… [Chad] was talking about how diverse the band is and the interviewer mentioned us, and [Chad] kind of snapped. [Laughs] Which is… I mean, it is what it is."

In an interview posted earlier this week with Sweden's Metal Covenant, Kroeger said that STONE SOUR was "trying to be NICKELBACK," adding, "[STONE SOUR singer] Corey Taylor has said some really nasty things about me before in the press. He talks about how easy it is to write a hit song. Well, show me. Show me. Write one. I have yet to hear one. They're okay. But they're not as good as NICKELBACK. They sound like 'NICKELBACK Lite.'"

Taylor on Monday fired back at Kroeger, calling him an "idiot" with a "face like a foot." He said: "I've never said it was easy to write a hit song. I don't know what the hell planet he's living on. Apparently it's Planet Kroeger, and there must be good weed there, 'cause he's an idiot."

Taylor claimed that he was "cued up to say some stuff" about Kroeger but added, "I don't have to say a damn thing — he is not a liked person. That's all we have to say about it."

Yet Taylor continued anyway, taking issue with Kroeger saying that Corey's other band, SLIPKNOT, "had to put on masks and jump around" as a gimmick to sell records and concert tickets. Taylor responded, "You can run your mouth all you want. All I know is I've been voted 'Sexiest Dude In Rock' wearing a mask. You've been voted 'Ugliest Dude In Rock' twice without one."

Taylor emphasized that he had no issues with the other members of NICKELBACK, saying, "Everybody else in that band I'm very, very cool with; I've hung out with them. It's just 'Face Like A Foot' who I can't really hang out with. He's got a face like a foot. Am I wrong?"