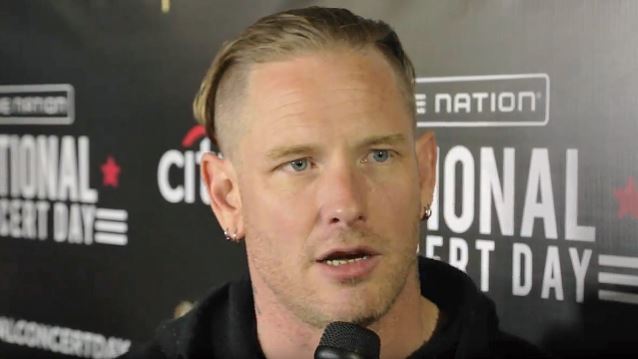 STONE SOUR is tentatively scheduled to enter the studio in early 2017 to begin recording its long-awaited follow-up to its last collection of original music, "House Of Gold And Bones", a double concept album which was released in two parts in 2012 and 2013.

"Right now we're kind of taking our time, 'cause the rest of this year is touring with SLIPKNOT, off and on," STONE SOUR singer Corey Taylor told Loudwire about the progress of the songwriting sessions for the next STONE SOUR release (see video below). "But the cool thing is we're getting together every couple of months and writing songs and stuff."

Even with the abundance of new material, STONE SOUR fans shouldn't expect the new album before the middle of 2017. Taylor says: "Timeline-wise, [we'll] hopefully get into the studio either [in] January or February of next year. Get that together in a couple of months and then try to get the album out by the summer."

Much of the pre-production for the next STONE SOUR album is taking place at Room 237, the Burbank, California recording studio owned and operated by the band's drummer, Roy Mayorga.

STONE SOUR, has released two EPs of cover songs — "Meanwhile In Burbank…" and "Straight Out Of Burbank" — and was slated to issue a third, titled "No Sleep 'Till Burbank", but those plans now appear to have been scrapped. Taylor told the "Someone Who Isn't Me" podcast: "Originally we were going to do three [covers EPs], and now it sounds like we're just going to do the two and just keep the other stuff we recorded as extra content for when we make the next album."

STONE SOUR last year named guitarist Christian Martucci as the permanent replacement for Jim Root, who was dismissed from the band in late 2013 after he decided to sit out the group's last tour in order to begin working on the new SLIPKNOT album. Martucci was recruited to play on that tour and was confirmed as a permanent member in March 2015 in a Facebook post.

Root did not speak kindly of STONE SOUR in interviews after he was fired, saying, "Some of the guys in STONE SOUR, I think they just want to be a radio band and write strictly for radio and try to be more of a poppy rock band. And that's not really what I'm into. There's at least one guy in the band that's only concerned about money. I really have no desire to associate with people like that anymore."

Root played on all five STONE SOUR studio records to date, including 2010's "Audio Secrecy" and "House Of Gold & Bones".