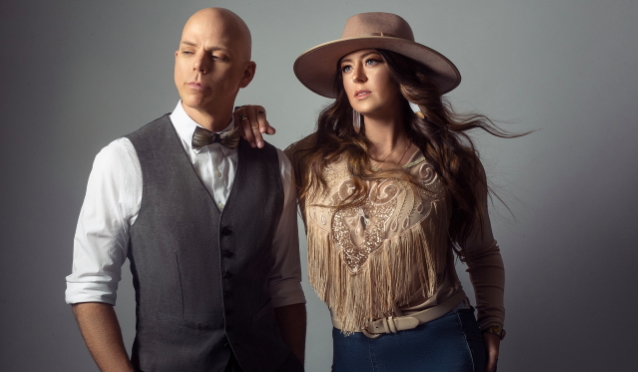 STONE SOUR guitarist Josh Rand has joined forces with PARALANDRA singer Casandra Carson to form a new band called THE L.I.F.E. PROJECT. The new group's debut single, "The Nothingness", will be released on Friday, April 23 on all streaming services, to be followed by THE L.I.F.E. PROJECT's first EP, due this summer.

Last May, Rand told the "Behind The Vinyl" podcast that he was working on a new project. "As of right now, I have 12 songs musically done," he said at the time. "Right now I'm looking at vocalists — different vocalists."

Regarding the musical direction of his new material, Josh said: "It definitely is different than what I think most people would expect. I decided if I was gonna do anything that I wanted it not to sound like STONE SOUR 'cause it's going to, to some degree. So, a lot of it, half of these songs… I started playing — I shouldn't say I started playing piano. I know how to edit a mini-piano, so I'm a great piano player now… But a lot of 'em are piano-based, and I'm running with it like that. And I've also started incorporating all these different instruments — all kinds of crazy percussion and stuff. 'Cause I just wanted to have fun and be creative and not try to write the next '30/30-150' or have that pressure of trying to do that. So I'm just kind of running with it, and that's where I'm at."

STONE SOUR has been off the road and out of sight since completing the touring cycle for its 2017 LP "Hydrograd". Singer Corey Taylor has been working with SLIPKNOT since then, recording and touring behind that group's sixth effort, "We Are Not Your Kind". He also released his debut solo album, CMFT", last October. Rand has been promoting STONE SOUR's new live album, "Hello, You Bastards: Live In Reno", which came out in December 2019.

Last August, Corey said that he was open to doing more recording and touring with STONE SOUR at some point down the line. Asked if there is "a future" for STONE SOUR or if it's "kind of up in the air," Corey told SiriusXM's "Trunk Nation Virtual Invasion": "It's kind of up in the air. I'm certainly not mad at STONE SOUR. [My solo album] is just something that has my attention; this is what I wanna do for a while.

"There's been some contention here and there, in the past — nothing that I'm gonna get into too much detail about — but it was just time for me to step away and do [the solo thing] for a while," he continued. "It was time for me to kind of do something different, and do it in a way that doesn't have the connotations of either band, to be honest.

"I'll never say never, because, obviously, the best way to make God laugh is to announce your plans out loud," he added. "But this is what my focus is right now."

Corey's latest comments echo those he made in June, when he told SiriusXM's "Trunk Nation With Eddie Trunk": "Yeah, [STONE SOUR is] kind of [on] the backburner right now. We all kind of felt that we did exactly what we wanted to do on 'Hydrograd' [album] and we're just giving it a minute. I talked to the guys in the band about the solo thing and what I wanted to do, and they were all totally onboard with it. Everybody else has kind of got things going on, so they're all cool. Josh is actually working on a solo thing of his own, which is great. So, yeah, I think STONE SOUR is kind of on hiatus right now, which is fine. If someday we wanna get back together and do some stuff, it'll be bigger than it was. But for right now, we're all kind of focused on kind of doing our own thing. But you never say never in this business."

We're pleased to introduce: The L.I.F.E. Project. Our debut single “The Nothingness” will be released Friday, April 23 on all streaming services.