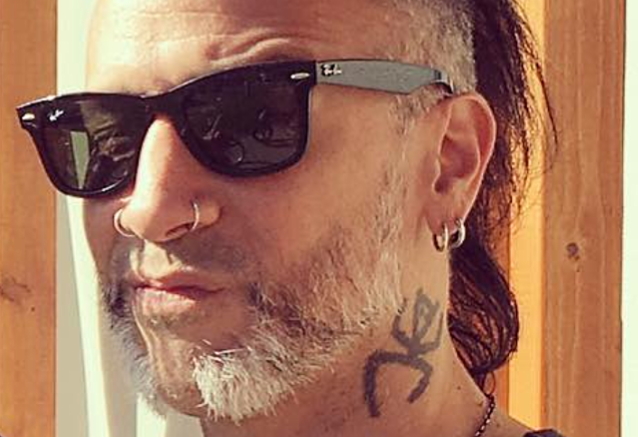 In a February 16 YouTube live chat, Vater Drumsticks artists Abe Cunningham (DEFTONES),Morgan Rose (SEVENDUST) and Roy Mayorga (STONE SOUR) opened up about the physical and mental aspects that drumming at their intense level has had on their bodies, what keeps them motivated to go on, pre-show rituals, life on the road and so on.

"I had a bunch of issues definitely come about in the last 10 years," Mayorga said (see video below). "Some people don't know but I did have a stroke from neck trauma from years of headbanging about 10 years ago. I [had] what they call a dissected artery here in the back of my neck — [the part that controls] all the motor skills. It [happened] from headbanging, from really throwing my head around when I play. It took me a bunch of years to recover from that, but I'm okay now. I think it was probably one of the worst things that's happened to me."

Asked if there was any physical therapy involved in his recovery, Roy said: "Very little. It was more like, 'Take some blood thinners for seven or eight months. Let the artery heal. And then come back to us. In the meantime, do your side step physical therapy.' I didn't drive or walk straight for the first four months, 'cause I couldn't feel my left side. It was all weird. The whole world was on a tilt to me, so I couldn't catch my balance. It was pretty bad. And then, about eight months later, around December [of 2011] or January of 2012, is when I got the green light that everything is okay. I got taken off the blood thinners, put on daily aspirin. And then I went and recorded an album two months later. I was okay."

According to Mayorga, the doctors initially thought he had been in a car accident due to the nature of his injuries. "They did [a few] x-rays, because they said there was a bunch of obstructions," he said. "I go, 'I'm a drummer.' [And they said,] 'How do you play your drums?' And I kind of showed them, [played them] videos, and they were, like, 'No, no, no. You can't be doing that anymore. This is definitely the cause of that.' So it forced me to set up my drums a little bit differently and sit up a little higher. 'Cause I was always tucked in, so that kind of crushed my artery. So now I sit a little higher, which makes me sit a little straighter, so I don't do that… I had to re-learn how to play completely."

Mayorga was the original drummer for SOULFLY from 1997 to 1999. Prior to joining SOULFLY, he also played with New York hardcore band SHELTER in 1996. He also sat behind the kit for for one of the most influential political bands from New York in the late '80s/early '90s, NAUSEA. He was a member of the band MEDICATION from 1999 to 2001, when he left the group to rejoin SOULFLY, with which he recorded three albums. He officially joined STONE SOUR in May 2006 as the replacement for Joel Ekman.