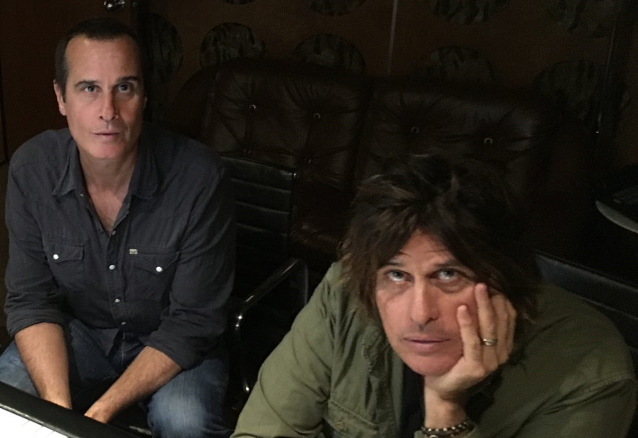 STONE TEMPLE PILOTS' DEAN DELEO: 'Being In A Band With My Brother Is Extraordinary'

During an appearance on the October 4 episode of SiriusXM's "Trunk Nation With Eddie Trunk", STONE TEMPLE PILOTS guitarist Dean DeLeo spoke about how he and his brother, STP bassist Robert DeLeo, have managed to avoid the spectacularly intense fallouts that have plagued other musician brothers, namely Ray and Dave Davies of THE KINKS, Noel and Liam Gallagher of OASIS, and Chris and Rich Robinson of THE BLACK CROWES.

"Things have been pretty good," Dean said (as transcribed by BLABBERMOUTH.NET). "Things are pretty good. The creative process that takes place between Robert and I, and the rest of the band for that matter, it almost adds to our relationship.

"Look, man, being in a band with my brother is extraordinary," he continued. "I'm a firm believer that you're only as good as those around you. And Robert is extraordinary, man, and it's amazing to be in a band with him and what he brings to the table. And it really does strengthen our relationship throughout this whole creative process.

"But you hear stories, man. How about the stories — I don't know the validity of it — but the Davies brothers? I heard there was actually punches thrown, man.

"When you're doing something that intimate — writing music together — it can go one of two ways," Dean explained. "And I surely had experienced it in my three decades with STONE TEMPLE PILOTS. You can walk in with something that is really part of you. You could walk in with a song, like, 'Oh my gosh. This is one of the greatest things I've written. I can't wait to bring it to the band.' You bring it to the band, and they go, 'Eh, it's okay.' [Laughs] So, you have to have thick skin, so you really have to be, like, 'Okay. I'm gonna pick up the pieces and move on from that and we're gonna go to the next song.' So, yeah, man, it's just this whole creative process that kind of takes place, and to kind of share that with somebody is pretty special.

"I used a word earlier describing this, and the word was 'intimate.' I mean, it really is intimate. You're really laying yourself out on the line, depending on the piece of music you're bringing forth. So, there's a lot there, man. And getting to do that with Robert is interesting in the respect that it really is like one mind. I almost know what he's gonna play, and vice versa — he knows exactly what my next chordal change will be. So it's really nice in that respect."

Gutt, a 45-year-old Michigan native who spent time in the early-2000s nu-metal act DRY CELL, among other bands, and was a contestant on "The X Factor", joined STONE TEMPLE PILOTS after beating out roughly 15,000 hopefuls during an extended search that began more than a year earlier.