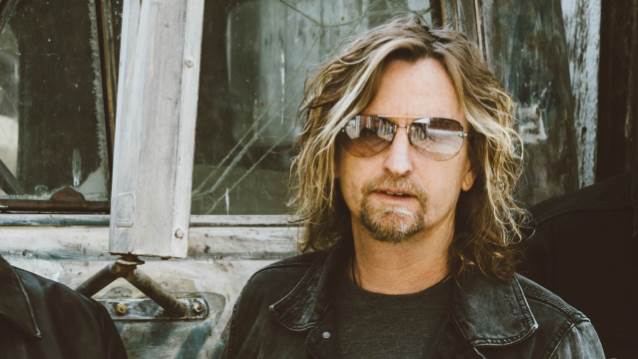 iRock Radio conducted an interview with singer Jeff Gutt and drummer Eric Kretz of STONE TEMPLE PILOTS at this year's Rock On The Range festival, which was held earlier in the month in Columbus, Ohio. You can now watch the chat below.

Asked to name the drummers that inspired him to become a musician, Kretz said: "Oh, man. You've gotta start off with… You've gotta go John Bonham [LED ZEPPELIN] all the way, because no one had the melody that John Bonham had with the power. But Bill Bruford [original drummer of YES] was one of those unsung heroes. All drummers will know who Bill Bruford is, but, man, the way that he could just turn everything upside down and inside out and change the time signatures and still make it sound great and melodic… Definitely those two. But you've gotta throw in Neil Peart [RUSH] for his just incredible awesomeness at everything he ever did."

STP's self-titled seventh studio effort was released on March 16 and is the band's first with Gutt.

Gutt made his live debut with the band last November in Los Angeles. The band recently did its first round of dates in support of the new album and will join forces with BUSH and THE CULT for the first time this summer for the "tri-headlining" "Revolution 3 Tour". The North American amphitheater trek begins on July 18 in Nashville and will hit an additional 19 cities over six weeks before concluding in Phoenix, Arizona on September 2. Each group will perform a full set in a different order each night.