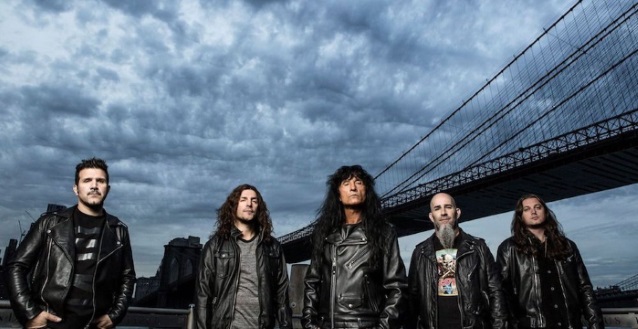 ANTHRAX Drummer On Upcoming Album: 'I Think This One May Turn Out To Be The Best One'

In a brand new interview with CantonRep.com, ANTHRAX drummer Charlie Benante, who is also the band's main songwriter, looked ahead at the follow-up to 2016's "For All Kings" album.

"I always like a bit of a challenge," he said. "I think the stuff that's already in demo form, it's already on its way to being included as the trifecta of this group of albums. I think this one may turn out to be the best one, but that's being premature. I'd really like to slow down on the touring and concentrate on creating some new stuff. Maybe next year will be the time to do that, and I won't have to look at a wardrobe case for a while."

Benante also talked about ANTHRAX's relationship with singer Joey Belladonna, who rejoined the band for the 2010 "Big Four" shows, in the process helping inspire a new wave of creativity, beginning with 2011's "Worship Music".

"I'm happy to say that we are in such a good place," Benante said. "I think back to the days of when we were a little bit arrogant, a little bit ignorant and with maybe too many yes men around to tell us, 'Don't do this.'"

ANTHRAX is supporting SLAYER on the first two legs of the latter outfit's last-ever North American run of dates. Also appearing on the bill are LAMB OF GOD, TESTAMENT and BEHEMOTH (with NAPALM DEATH replacing BEHEMOTH for the second leg).