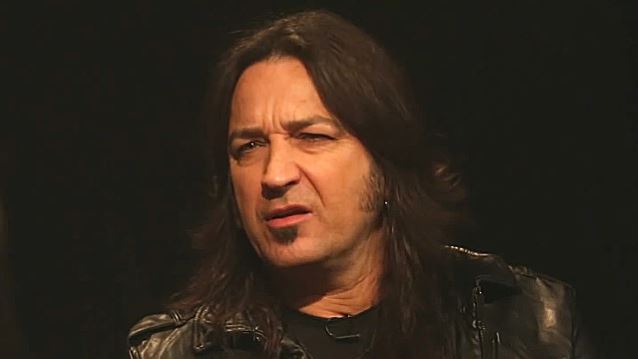 STRYPER Frontman Shoots Down TED CRUZ Rumor: 'I Don't Think I Look Anything Like Him'

STRYPER frontman Michael Sweet gave interviews to CNN and NBC 5 Thursday (March 17) in response to social media talk that he and presidential hopeful Texas Sen. Ted Cruz were one and the same.

The rumor was apparently started by author Michael Boulerice, who spread an online joke suggesting Cruz and Sweet were the same person. It started with the photo comparison below, likening their facial features. It soon became the number one story trending on Facebook.

"It is so mind boggling at times what goes viral," Sweet said.

"Yesterday morning I woke up and someone said, 'You know you are the number one trending story on Facebook.' And I thought to myself what story? Because I didn't think about that story. I really did not think it was much of anything. And I went and looked and there it was.

"I don't think I look anything like Ted Cruz. I am eight years older than Ted. I got long hair," Sweet added.

The STRYPER frontman, who has a new solo album, "One Sided War", coming out later in the year, also released a separate statement to Billboard, saying: "The whole Michael Sweet/Ted Cruz comparison came as a surprise. I don't see any resemblance but I'm certainly laughing at the whole thing going public and being the #1 trending story on Facebook! I do hope Ted is a STRYPER fan and that he comes out to a show this year on tour. Maybe I'll have him up for a song so we can put this whole thing to rest."