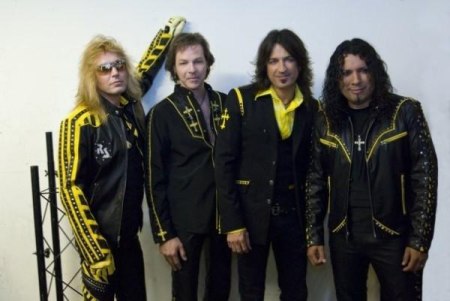 STRYPER: 'The Covering' Album Pushed Back To Early 2011

The release date for "The Covering", the much-anticipated covers album from Christian hard rockers STRYPER, has been pushed back to early 2011 from the previously announced October 13. The band states, "Originally, the album was projected to be released [via Big3 Records] in the fourth quarter of 2010. However, the business and label team feel that more set-up time will allow for a stronger release of this amazing recording."

"The Covering", produced by frontman Michael Sweet, will be unlike any previous STRYPER recording in that it's a collection of cover songs from bands that inspired them and helped to shape their sound and musical identity, including hits from JUDAS PRIEST, IRON MAIDEN, LED ZEPPELIN, KANSAS and many others. A cover of BLACK SABBATH's classic track "Heaven and Hell" will be the first single, with an expected iTunes release in advance of the album. "The Covering" will also include "God", a new original recording from STRYPER.

"STRYPER recorded 'The Yellow and Black Attack' (Enigma Records) back in 1983, and it was released the following year," says Sweet. "Twenty six years have passed and after seven studio releases and multiple compilation and live projects, we decided to show our fans where our roots lie musically.

"'The Covering' consists of particular songs and groups that molded and shaped us and made us who we are today."

One of the highlights for STRYPER fans is that "The Covering" is the first studio album in nearly two decades on which all four original members, plus longtime keyboardist Charles Foley, have recorded together.

"Tim [Gaines, bass], Robert [Sweet, drums], Oz [Fox, guitar] and I haven't recorded a full-length project together since 1990's 'Against the Law' (Enigma Records),so this is truly history in the making. We also had what was probably the best time we've ever had recording a record together and I believe that this comes through in the energy and the spirit of each track.