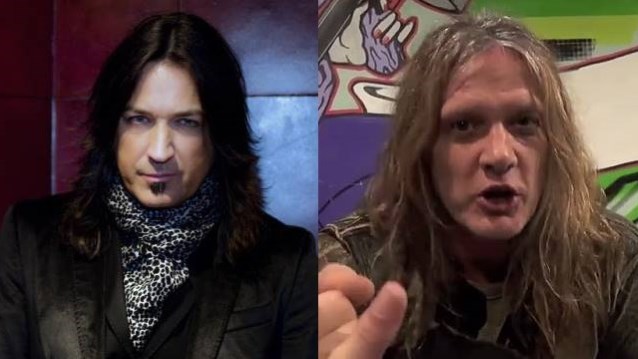 STRYPER frontman Michael Sweet says that he was approached to produce a solo album from Sebastian Bach, claiming that the plan was to write music that was reminiscent of "those powerful songs from [Bach's SKID ROW] past."

During Sweet's appearance on the January 19 edition of Eddie Trunk's SiriusXM satellite radio show, "Eddie Trunk Live", Trunk brought up the issue of Bachwondering in a recent interview why so few of his 800,000 Facebook followers purchased the former SKID ROW singer's latest solo album, "Give 'Em Hell", when it was first released.

Sweet told Trunk: "This isn't a bash against Sebastian at all; it's just my opinion. I think people wanna hear Sebastian of old. They wanna hear the SKID ROW Sebastian. They wanna hear the hits. And he's giving them modern rock. It's ['Give 'Em Hell'] a good album, it's a good-sounding album, but it's not the glory days. And I think that's the one thing STRYPER at least tried to do, and I saw the numbers to prove it."

He continued: "Our album 'Reborn', which is a little more modern... 'Murder By Pride' was in between modern and old... they sold less than 5,000 the first week out. We come out with 'No More Hell To Pay', which is going right back to our roots, giving the fans what they want and wanted, and we did almost 10,000 units first week out."

Asked if there was any truth to reports that he was supposed to be collaborating with Bach on some new music, Michael said: "I don't wanna throw him under the bus or make him feel awkward or weird. I was approached to do a Sebastian album… to produce it and to co-write with him and basically try to kind of go back to those powerful songs from the past. Not make a dated record, but just that style, the anthemy SKID ROW stuff that everybody loves. And that was the plan."

He continued: "Management got involved, and Sebastian and I e-mailed each other back and forth. It was going down the track a little ways and all of a sudden it came to a screeching halt. He decided he wanted to do an acoustic album, or wanted to do this, or wanted to do that. And I was just, like, 'Guys, let me know what's going on, if it's going on.' And I never really heard any more about it, so I guess it's not happening. But it would have been cool."

Sweet added: "I'll tell you right now, I think I could have helped Sebastian make a killer album. But hey… We'll never know."

After Sweet's comments were first published online, Bach reportedly wrote in a tweet that has since been deleted: "Dear @michaelhsweet : shut your mouth. Before I shut it for you."

"@sebastianbach: Dear @michaelhsweet : shut your mouth. Before I shut it for you." Im just glad it's not me this time. Boys lets get along!!