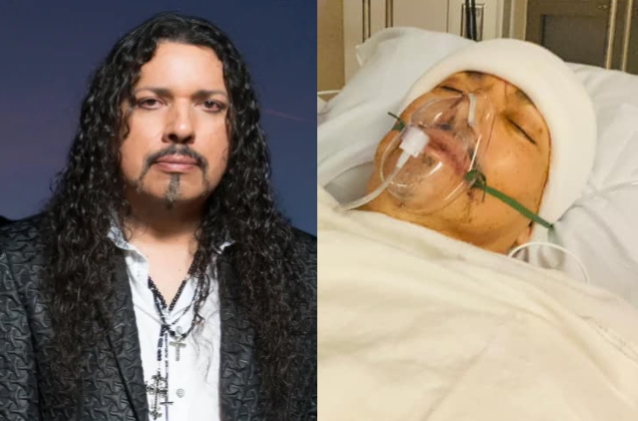 STRYPER guitarist Oz Fox underwent the first of his brain surgeries on Thursday, March 4 to treat one of the tumors that were found in his head — one by his ear and the other in the back of his brain — when he suffered his first seizure in August 2018 while performing with SIN CITY SINNERS at Harrah's in Las Vegas.

More than two years after the tumors were discovered, both had grown and were posing a serious health risk to the guitarist, who turned 59 last June. Specifically, the tumor behind the ear, if it continued to grow, could have caused hearing loss, balance, vision and spinal problems, while the tumor in the back of Oz's brain was in the area where left side of his arms, hands and body operate. Removing it could have affected the upper left motor function and potential ability to recognize faces and objects.

Late Thursday night, Oz's wife, Annie Lobért, issued the following update on his condition: "He is out of surgery & in ICU! I'm getting ready to see Oz.

"LIGHT at end of the tunnel!

"Dr. Just came down before to see me and shared: Oz did great during surgery with guitar playing & talking up a storm about favorite tv shows!

"We have a few complications/concerns.

1. Dr. had to leave a small 1-2 inch piece of the wall of tumor that blended in with the rest of his brain. Affected his playing functions so they couldn’t remove it. In a few days he won't be able to play with his arm, but after the swelling goes down, hopefully he will be back to normal.

2. Breathing not good during surgery. Airways closed up halfway thru so they had to give him a breathing tube. He will be on it tonight and hopefully they can wean him off of it in the next 24 hours. They will also try to figure out what's wrong with his airway in his throat in the next few days.

"Thank you for all your prayers!"

She later shared an update, saying that the breathing tube has been removed and that Oz was breathing completely on his own.

Fox discussed his health during a January 17 interview with SIN CITY SINNERS manager Jason Green. Speaking about his upcoming procedure, Oz said: "They're gonna take me in. And I've got a great team of people, great team of doctors that are very specialized. They do hundreds of these procedures a year. They're gonna open up the skull. The good thing is the [first] tumor [they will operate on] is towards the outside of the head, towards the outside of the brain, which it's easy access — they don't have to go too deep to get to it. And they did all testing on me to make sure that wherever they go in there, they won't damage any of my functions. They did some really extensive testing — something called an fMRI, Functional [Magnetic Resonance Imaging], and they had me think about things, they had me actually act like I was playing guitar, and I had to hum backgrounds while I was playing, 'cause I couldn't move my head or my jaw. I had 'em play a STRYPER song, and I just kind of played to it and acted like I was playing guitar and tried to imagine what I was playing. And then they would see where the brain functions were while I was doing all that. And after they checked everything and went through it, they figured out that all of my activity for playing and singing and all that was nowhere near the tumor. So there's a good chance I'll retain all of that. But there's still always a risk. You never know with the brain. They seem to think I'm gonna be okay after the procedure, but it'll take time to recover, 'cause you may have some bleeding, some brain swelling — all that kind of stuff."

Formed 38 years ago, STRYPER is the first overtly Christian metal band to go mainstream. The group's name comes from Isaiah 53:5, which states: "But he was wounded for our transgressions, he was bruised for our iniquities: the chastisement of our peace was upon him; and with his stripes we are healed."

He is out of surgery & in ICU! I’m getting ready to see Oz.

LIGHT at end of the tunnel!

Dr. Just came down before to...

I got to see my Ozziebears!!!

The breathing tube is OUT!

Your prayers are working!

We want to thank everyone who...