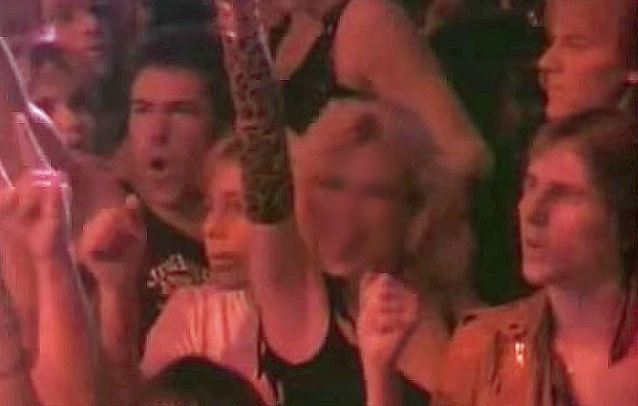 According to Pacific Standard, a newly published study has found that 1980s heavy metal fans "were significantly happier in their youth, and better adjusted currently" compared to their peers who preferred other musical genres, and to a parallel group of current college students.

Research in the 1980s suggested that young "metalheads" were at risk for poor developmental outcomes. No other study has assessed this group as adults; thus, a research team led by Humboldt State University psychologist Tasha Howe examined 1980s heavy metal groupies, musicians, and fans at middle age, using snowball sampling from Facebook. Online surveys assessed adverse childhood experiences, personality, adult attachment, and past and current functioning in 377 participants: 154 who were heavy metal fans growing up in the 1980s (including musicians and "groupies"); 80 who typically listened to other types of music during their teen years; and 153 current students at a California university. Results revealed that metal enthusiasts did often experience traumatic and risky "sex, drugs, and rock-and-roll" lives. However, the "metalhead" identity also served as a protective factor against negative outcomes. They were significantly happier in their youth and better adjusted currently than either middle-aged or current college-age youth comparison groups.

"Despite the challenges of adverse childhood events, and other stressful and risky events in their youth," the researchers wrote, former metal fans "reported higher levels of youthful happiness" than peers with other musical tastes as well as today's college students. "They were also less likely to have any regrets about things they had done in their youth." In fact, non-metal fans "sought psychological counseling for emotional problems more than any other group, indicating a less happy and fulfilling perspective on their 1980s adolescence."

The study, published in the journal Self And Identity, added that participation in fringe style cultures may enhance identity development in troubled youth.

"Social support is a crucial protective factor for troubled youth," researchers wrote. "Fans and musicians alike felt a kinship in the metal community, and a way to experience heightened emotions with like-minded people."

The full text of the article, titled "Three Decades Later: The Life Experiences and Mid-Life Functioning of 1980s Heavy Metal Groupies, Musicians, and Fans," can be downloaded for $40 at this location.