Legendary multi-platinum rockers STYX will take the Las Vegas stage once again for a five-night engagement at The Venetian Theatre inside The Venetian Resort Las Vegas. The shows will be held on January 27 and 28 and February 1, 3 and 4, 2023. All shows are scheduled to begin at 8 p.m.

Tickets start at $45, plus applicable fees, and will go on sale to the general public Friday, September 30 at 10 a.m. PT. A limited number of VIP packages will also be available. Tickets will be available for purchase at Ticketmaster.com, VenetianLasVegas.com, any box office at The Venetian Resort, or by calling 702.414.9000 or 866.641.7469.

The six men comprising STYX have committed to rocking the paradise together with audiences far and wide by entering their second decade of averaging over 100 shows a year, and each one of them is committed to making the next show better than the last. STYX draws from over four decades of barnburning chart hits, joyous singalongs, and hard-driving deep cuts. Like a symphony that builds to a satisfying crescendo, a STYX set covers a wide range of stylistic cornerstones. From the progressively sweeping splendor that is "The Grand Illusion" to the hunker-down fortitude of all that is the "Blue Collar Man", from the majestic spiritual love for a special "Lady" to the seething indictment of preening, primping pageantry for pageantry's sake of "Miss America", from an individual yearning for true connection as a "Man In The Wilderness" to a soul-deep quest to achieve what's at the heart of one's personal vision in "Crystal Ball", from the regal reach-for-the-stars bravado of "Come Sail Away" to the grainy all-in gallop of that rugged "Renegade" who had it made, the band draws on an unlimited cache of ways to immerse one's mind and body in their signature sound.

A new era of hope, survival, and prosperity comes calling with the release of "Crash Of The Crown", STYX's latest "masterpiece" studio album, which was written pre-pandemic and recorded during the trying times of the pandemic. The multi-platinum rockers — James "JY" Young (lead vocals, guitars),Tommy Shaw (lead vocals, guitars),Chuck Panozzo (bass, vocals),Todd Sucherman (drums, percussion),Lawrence Gowan (lead vocals, keyboards),Ricky Phillips (bass, guitar, vocals),and "Crash Of The Crown" producer and co-writer Will Evankovich (guitars) — released their 17th album June 18, 2021 on the band's label, Alpha Dog 2T/UMe, which is available as clear vinyl, black vinyl, CD on digital platforms. They released more new music on September 17, 2021, "The Same Stardust" EP, originally sold as part of Record Store Day (June 12, 2021). Available on blue 180-gram 12-inch vinyl only, featuring two brand-new songs on side one ("The Same Stardust" and "Age of Entropia"),as well as five live performances on side two of some of STYX's classic hits previously heard during their "Styx Fix" livestreams that have been keeping fans company during the pandemic on their official YouTube page, including "Mr. Roboto", "Man In The Wilderness", "Miss America", "Radio Silence" and "Renegade". It's available worldwide on all digital platforms.

"Crash Of The Crown" is the follow-up to STYX's 16th studio album, "The Mission" (their first in 14 years at the time, which critics also called "a masterpiece") which was released June 16, 2017 on Alpha Dog 2T/UMe. The two-disc reissue of "The Mission" was released on July 27, 2018 via Alpha Dog 2T/UMe, which includes a CD of the original album, as well as a Blu-ray of the album mixed in 5.1 Surround Sound accompanied by stunning visualizations for each of the album's 14 songs based on the album artwork.

LAS VEGAS! We're coming to The Venetian theatre January 27 - February 4, 2023 at the Venetian Resort. Hope to see you there!! Get your tickets Friday, Sept. 30 at 10 AM local. found.ee/styx_vegas23 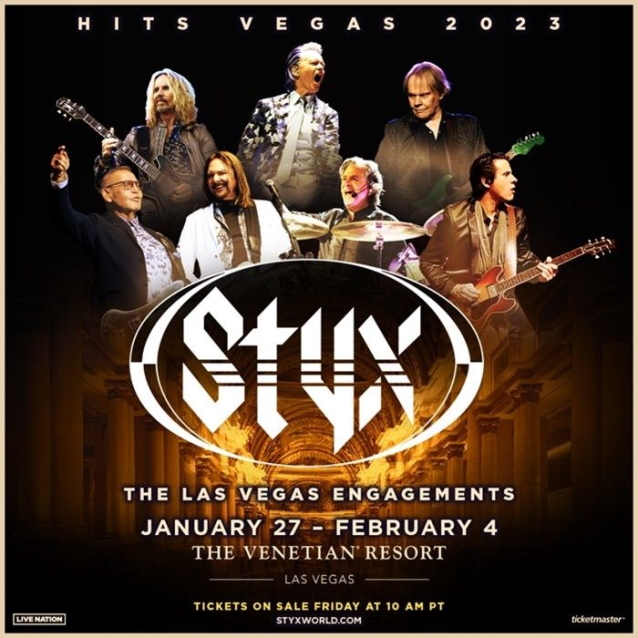