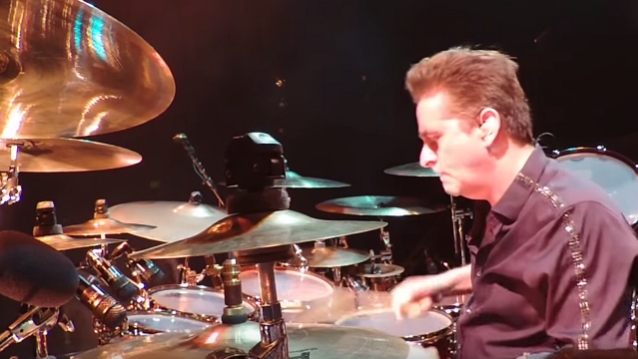 STYX Drummer TODD SUCHERMAN On NEIL PEART: 'He Had His Own Voice On The Instrument'

STYX drummer Todd Sucherman has paid tribute to Neil Peart, who died on Tuesday (January 7) in Santa Monica, California after a three-year battle with glioblastoma, an aggressive form of brain cancer. The iconic RUSH drummer was 67 years old.

On Friday (January 10),Sucherman took to his social media to write: "I only met Neil Peart once, but it was a lovely meeting indeed. I had flown to LA to work on Brian Wilson's Gershwin record in December 2009 and while I was at the hotel the night before the sessions began, I received an email and photo from Jimmy Johnson (our long time guitar tech, and Neil's long time friend and RUSH crew member). Jimmy said, 'Neil just sent me this picture of his hockey drum kit. He's recording the Canadian Hockey Night Theme with it in LA tomorrow.'

"When I walked into Ocean Way Studios the next morning, Sabian cymbal artist rep, Chris Stankee, was in the lobby. I gave him a hug and asked him what he was doing there and he said was looking after Neil. He suggested we should say hi to him now as they were about to get to work in the studio next to the one where I would be working, so I dropped off my cymbals and grabbed a bagel (I was hungry) and off we went to the next studio over from Brian's. There was the hockey kit, the actual Stanley Cup, a full big band and an entire film crew. We shook hands and chatted, I congratulated him on his new young daughter, and as I remember — he was the one that was asking me all the questions. He wanted to know about working with Brian Wilson, what that was like, etc. We brought up many mutual friends (Lawrence Gowan, Jimmy Johnson) and as we were chatting, I noticed the whole room was ready and waiting for us (me) to stop talking so they could all get to work. I said to Neil, 'Well, looks like I should be on my way and let you all get to business!' Chris then snapped a photo of us (bagel still in hand) and off I went. He was incredibly warm, personable, curious, and felt we could have kept the conversation going had it not been for 30 people waiting to get to work.

"He had his own voice on the instrument but even more, he had his own literary voice. Lyrically unique, and he lived through such unimaginable tragedy and ultimately came out the other side to continue his life passionately.

"In particular '2112' through 'Signals' loomed large in my childhood. I learned every single note of 'Moving Pictures' when I was in 6th grade. That record still can catapult me back to those days. I was truly grateful to have a few quality minutes with the man. I wish there had been more.

"Every story I ever heard about the guys in RUSH, and I've heard a lot, all really portrays them as wonderful, exemplary human beings.

"My condolences to Neil's family, musical family, road family, and his friends. RIP."

THE POLICE drummer Stewart Copeland once called Peart "the most air-drummed-to drummer of all time."

I only met Neil Peart once, but it was a lovely meeting indeed. I had flown to LA to work on Brian Wilson's Gershwin...