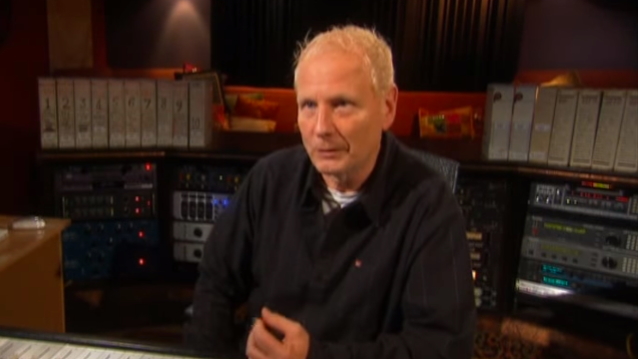 RUSH's Longtime Producer TERRY BROWN Pays Tribute To NEIL PEART: 'I Have So Many Fond Memories'

RUSH's longtime producer Terry Brown has paid tribute to drummer Neil Peart, who died on Tuesday (January 7) in Santa Monica, California after a three-year battle with glioblastoma, an aggressive form of brain cancer.

Brown took to his social media on Friday (January 10) to write: "It is with a heavy heart that I have to acknowledge the passing of Neil on this 10th day of January 2020. I have so many fond memories of good times spent listening to him compose some of the greatest percussive moments on record and working with his lyrics which he took so much care to write for us all to cherish.

"It seems unfathomable that a man could use so much of his brain to enrich our lives and then leave us so abruptly.

"Thank you Neil for all you gave us, I have added a shot of you and me at my 60th birthday — a wonderful memory, thanks for being there and being such a huge part of my life.

"My heartfelt thoughts go out to all the RUSH families, friends and fans on this sad occasion."

In a 1999 interview with Guitar Shop, RUSH guitarist Alex Lifeson explained the band's decision to work with other producers after "Signals": "'Signals' has a completely different character from 'Moving Pictures'. And for me, 'Signals' didn't quite hit the mark in terms of songwriting. That was the last record we did with co-producer Terry Brown. Terry was always quite involved in the whole aspect of putting together a RUSH record; besides being the co-producer he was often involved in the latter stages of arrangements. During 'Signals', I think we needed more feedback from him and we weren't quite getting it. The whole area of keyboards was becoming a bigger part of our music. We were starting to develop more paddy sounds that took up a lot more space, and these sounds vied with the guitar on the same sonic area. I remember it was real struggle to place the guitar where it should have been sitting, and to get the guitar and keyboards to a point they would sound seperate, yet together. For me, there are many moments on 'Signals' where the guitar was short-changed. 'Subdivisions' is a perfect example-the guitar is almost invisible. But it was a sonic issue, not a personal thing. We were very unified in direction and it was important to us to explore this new keyboard-laden area of our music."

It is with a heavy heart that I have to acknowledge the passing of Neil on this 10th day of January 2020. I have so many...